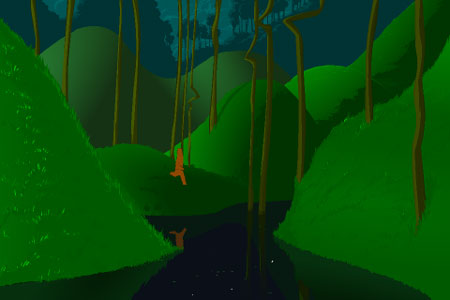 Unlike many of his compatriots, animators who left Disney Studios when the company ovelords decided to abandon their 100 year heritage and close their 2-D animation studios in favor of CGI, Adam Phillips left his position running the effects department of the Sydney-based studio of his own volition.

His focus since then has been on his own short animations, composed in Flash and posted on the net. His Hitchiker short won the Flash Forward Film Festival in 2003, followed eventually by the first of what has be called the “Brackenwood” series of short animations, which are simply remarkable. One of the early shorts from that series, Prowlies at the River, really made people in the animation community sit up and take notice, and set new standards for the use of Flash in animation.

The “Brackenwood” stories focus around Bitey, a mischievous faun-like character who taunts and teases other creatures, and usually gets his comeuppance. They take place in some mythical place or time, populated with unreal creatures that, in Phillips hands, act and feel very much like real animals. The image above is from LittleFoot, the most recent in the series.

You will find most of the Brackenwood animations on the Animations page of Phillips website, as well as some other shorts on the Bitey Castle page. Don’t forget to go back to the home page, though, and check out the great little shorts in the 30 days: 30 shorts section, linked by small numbered boxes in the upper right.

There is also a 3-part interview with Phillips on the Cold Hard Flash site. (Here are parts 2 and 3.)

Phillips’ professional background is apparent in his superb command of timing (which is everything in animation), his fluid ability to tell a story visually (most of the Brackenwood animations are wordless, or at least not in any language I recognize), and to compose and frame images dramatically. He combines those skills with a great sense of color, atmosphere and lighting, and a nuanced ability to suggest the complex with the simple, to immerse you in his wonderful pseudo-mythical world.

What really sets Phillips apart as a Flash animator is the ingenious way he has worked within the limits of vector based animation to achieve a wonderful sense of studio-level animation. He occasionally uses Swift 3-D, a vector based 3-D animation app that compliments Flash, for some camera moves, certain types of animation and a bit of modeling, but Flash is the main tool, and he really makes it look like it was created for character animation, rather than motion graphics.

It is his thorough understanding and clever application of the limits and strengths of vector animation that make his work shine. Look, in particular, at the way he suggests dappled light and shadows, and the remarkable way he creates the effects of moving water.

Phillips has been able to generate enough interest to keep producing his independent animations, which get a large audience, but still has to put projects on hold, like his much anticipated Waterlollies, the latest in the Brackenwood series, while he takes on freelance animation jobs. Phillips indicates that he has plans for a Brackenwood feature film, which is something to look forward to.

One Reply to “Adam Phillips”