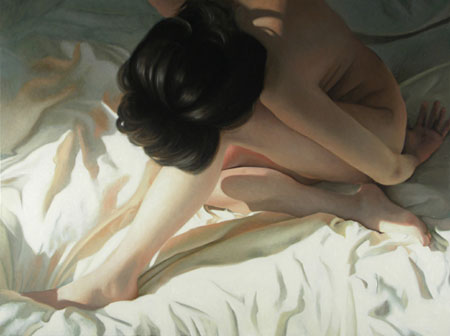 Alyssa Monks paints figures. Starting from that simple statement, her figures are explorations of the forms within the human form, something that figurative artists have found compelling for hundreds of years.

The figures in her compositions are sometimes collapsed into contracted positions, arms wrapped around themselves, almost, but usually not quite, fetally. My guess is that this is not so much conceptual as visual, a desire to perceive the forms as forms, often revealed in sheets of light and shade cascading across their surface.

If you look through her online galleries, which are arranged by year, you will find excursions into more traditional figures, laying in beds, standing in rooms or arranged almost as portraits, but her most intensely focused work isolates the figures in the space of the composition, with just a bit of the surrounding environment. She uses the white of beedsheets or, in her recent work, the porcelain bathtubs or wall tiles of bathrooms, to compose the figure as dark elements against light.

In her work from the past year, she is focusing in more closely on small parts of the figure, like part of a face and neck, a composition consisting of a breast, hand and cheek, or other small glimpses of the form, accenting the perception of the figure almost as landscape.

In her work from 2002, the environment came forward, and some of her paintings from that year are interiors without figures, or interiors in which the figure is only a small element. It’s fascinating to look at her eye for these spaces and compare it to her exploration of the figure as both a form and a place.