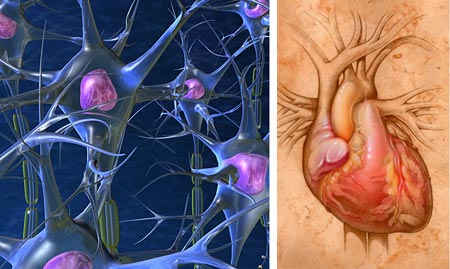 Good medical illustration, to my eye, can be as exciting and visually fascinating as the most far out science fiction illustration or movie concept art and as bizarre and intriguing as the wildest surrealist imaginings. The striking thing about medical illustration when viewed in this light is to remember that it is essentially realism. It is realistic depictions of things that in many cases can’t be viewed with the unaided eye, but a form of realism nonetheless.

I’ve found medical illustration to be a vastly underappreciated branch of illustration, but I’ve always liked it. (I’ve even done a bit myself, in a way, in the form of the illustrations and Flash animation for The Interactive Body feature in the Gift of a Lifetime web documentary.)

Edmond Alexander and Cynthia Turner, who share a studio under the name of Alexander & Turner, have been notable names in the medical illustration field for over 20 years.

Alexander seems to specialize in envisioning biological processes at the cellular, and sometimes molecular, level (image above, left). He utilizes intense color relationships and dynamic contrasts of value to make the processes snap into clear relief in a way photomicrography can’t. The result can be dramatic compositions filled with fascinating forms, often intertwining in dramatic relationships.

Cynthia Turner works more often at the macroscopic level, portraying organs or other parts of the human body that need to be diagramatically sectioned or otherwise have elements accentuated, again in the service of making things clear and dramatic that would be difficult, if not impossible, with photography. Turner tends to work in a way that feels more traditionally illustrative, and I’m particularly fond of the illustrations in which she brings part of the painting or drawing to a high degree of finish and leaves other parts to blend out into the recognizable lines of the initial sketch (image above, right).

The Alexander and Turner site has short bios of each artist and a gallery of their work. Unfortunately, like many artists who have posted their images on the web, and particularly those in the field of medical illustration, Alexander and Turner have felt compelled to mar their larger images with watermarking, in the vain hope that it will somehow protect them from being swiped.

At the risk of being repetitive, I feel I have to point out again to artists on the web in general, that this will only protect images from the laziest of image swipers. If your work is in print, anyone with a $50 scanner can produce higher resolution files of your images that you will ever post on the web.

I tend not to feature artists on lines and colors whose web based work is watermarked, but I found some unblemished examples of Alexander and Turner’s paintings on the Medical Illustration Source Book site for you to enjoy.

When approaching medical illustrations as artworks, particularly those of microscopic terrains, try thinking of them as abstract at first, then let them resolve into realism. In the case of Turner’s work, look first at the drawings around the edges, in those images where where she has left them as part of the composition, and then move to the more rendered forms.