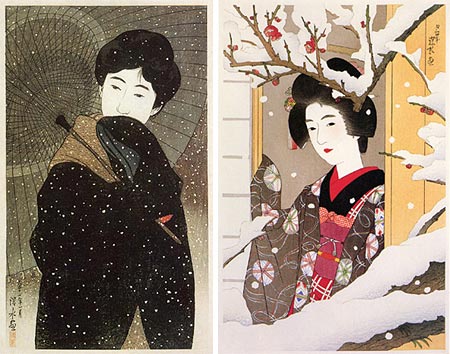 Ito Shinsui was a Japanese printmaker who, like his contemporaries Hiroshi Yoshida and Kawase Hasui, was part of the Shin Hanga movement in the early 20th Century. (In writing these artist’s names, I’m using the Western convention of putting the given name first.)

Shin Hanga was essentially a revival of the art of Ukiyo-e woodblock prints from the previous century (see my post on Hokusai), often combined with influences from Western art. Interestingly, one of the major European influences on the Shin Hanga artists was that of the French Impressionists, who, in turn, had been dramatically influenced but the brilliant colors and subtle compositions of Ukiyo-e prints.

Unlike Yoshida and Hausi, who, in keeping with the majority of the Shin Hanga artists, concentrated on landscape and scenes of life in towns and cities, Shinsui focused on the depiction of people, in particular beautiful young women.

His elegant compositions, in which the negative space is as vital as the primary shapes, are often 3/4 length figures with minimal space around them in the the frame. His beautifully dressed subjects, their decorative robes flowing about them in graceful waves, are frequently engaged in the application of makeup or preparation for the bath, and are warm with an understated eroticism. His forms are delicately modeled, with fine lines delineating areas enlivened with rich but subtle color.

You can see some of the influence of European art in certain prints (in his later years, you can even see the influence of cubism), and the strong traditions of Ukiyo-e in others. Though his depictions of women are his most notable subjects, Shinsui also created beautiful, brilliantly colored landscapes, which are not to be missed. He was at one point awarded the status of “intangible living treasure” by the Japanese government.