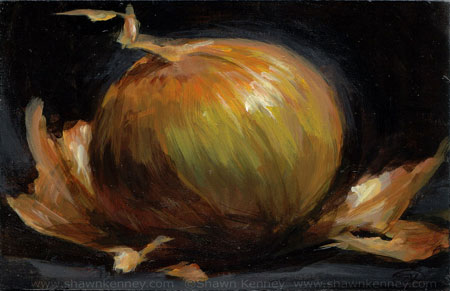 Shawn Kenney is a Rhode Island based painter who has been warming up for his regular painting practice with small (4×6) daily paintings since the summer of 2006. Initially this was not inspired by the daily painting blogs that have become prevalent in the last year or so, and Kenny wasn’t blogging about the studies, just painting them for his own advancement as a painter (what a concept).

He eventually did bring his small paintings to the web with a painting blog, but with a twist. The subject matter of most of his small paintings is food, a common subject for small daily studies because of its familiarity, variety and the ease it provides in acquiring and arranging colorful and visually interesting objects.

In a seemingly unrelated series of events in a cooking class, involving meat trimming and a bit of first aid, Kenney met food writer and blogger Lydia Walshin. They became friends and Walshin saw some of Kenney’s small food paintings as a studio open house and asked if they were for sale.

Out of this came an idea in which Kenney asked Walshin to help him to donate a portion of the sale of his small food paintings to organizations involved in hunger relief, an area in which she was already active both personally and through the Ninecooks cooking group. With the additional involvement of Peg Meade, as business manager and “set designer” for Shawn’s daily food paintings, they launched the Will Paint for Food site which works, in conjunction with Kenney’s painting blog, to bring a portion of the proceeds from those paintings sold to organizations like Heifer International, the Rhode Island Community Food Bank and Share our Strength.

I wasn’t able to easily find out the percentage donated or the average price of the paintings in my initial perusal of the two blogs, but perhaps that will be addressed as they progress.

He paints his larger works in oil but most of the small food studies are done in acrylic, in which he manages to keep an oil-like feeling of painterly brush strokes and surface texture. He seems to feel particularly challenged by reds, and takes on subjects like jars of sauce that let him work with those color schemes, still keeping to the original purpose of daily painting practice as a way to move forward as a painter.

3 Replies to “Will Paint for Food (Shawn Kenney)”