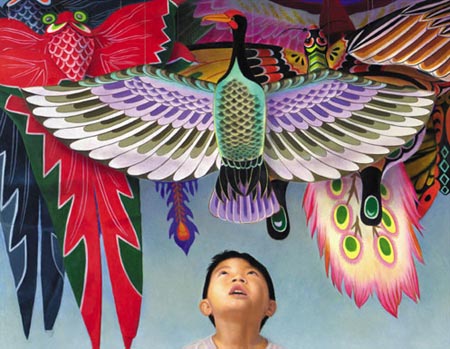 Kam Mak is a Chinese-American illustrator whose web site has essentially no bio or text information on it at all. His images, however, speak eloquently.

I was able to find some biographical information on the web sites of his publishers and a gallery. Mak was born in Hong Kong but grew up in New York’s Chinatown section after his family moved there in the early 70’s. He became involved in an Art Workshop designed to encourage inner city youths to investigate art and, to my mind, makes a terrific case that programs of that kind can indeed be a fertile ground for nurturing talent. Mak went on to study at the School of Visual Arts on a full scholarship and earned his BFA in 1984.

His beautifully realized illustrations have illuminated the covers and interiors of books from Harper Collins, Simon and Schuster and others. He has been awarded the Oppenheim Platinum Medal for best children’s picture book, the National Parenting Publication Gold Medal, and both Gold and Silver Medals from the Society of Illustrators. He is an assistant professor at the Fashion Institute of Technology.

Mak’s images show his heritage and the influence of the junction of two cultures in Chinatown. His work is often alive with images from Chinese culture, filtered through a fertile imagination and painted with a relaxed and confident realism in the tradition of European Academic painting.

In his paintings paper dragons come to life, imperial goldfish float in water or air, cats make existential comments and butterflies hint of the miraculous.

Mak can also be very down-to-earth in his portrayals of people, young adults in particular, and themes of growing up in Chinatown are evident in his work and exemplified by My Chinatown: One Year in Poems, which he both wrote and illustrated.

He also illustrated The Moon of the Monarch Butterflies (The Thirteen Moon by Jean Craighead George, The Dragon Prince: A Chinese Beauty & the Beast Tale by Laurence Yep and The Year of the Panda by Miriam Schlein. He is featured in American Dragons: Twenty-five Asian American Voices by Laurence Yep.

Nowhere in the bios or on Kam Mak’s site did I find mention of the fact that his name is a palindrome.

One Reply to “Kam Mak”