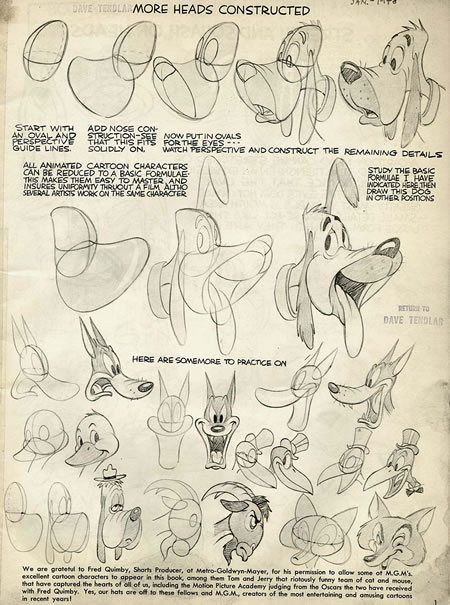 Wow! What an amazing treasure trove this is for anyone interested in animation or cartoon drawing.

It should really be titled: “The $100,000 Animation Drawing Course for $8”. There is so much great stuff here that this should be a site of its own, but it’s actually part of the terrific ASIFA-Hollywood Animation Archive Project Blog. There are a multitude of resources here that will be the subjects of individual posts in the future, not the least of which are Preston Blair, Jon Kricfalusi and the Animation Archive itself, but I want to concentrate here on the “Drawing Course”, the premise of which is best summed up by Kricfalusi in his introduction:

“You can go to animation school, spend a $100,000 and not learn a damn thing about the basics of good animation drawing- OR you can buy a Preston Blair book for $8 and learn it all in a couple months. You pick.”

To back it up, Kricfalusi, the animator and instigator responsible for the brilliantly demented Ren and Stimpy cartoons, among other things, proceeds to take you through his course in 10 pages, with the assistance of supplied materials like pages from Preston Blair’s classic instruction book, his own model sheets for Ren and Stimpy, and model sheets from Disney, MGM and elsewhere. Remarkable.

Preston Blair was a brilliant animator for Disney (Fantasia, Pinocchio, Bambi) and MGM (on many Tex Avery classics) who wrote what is considered to be the definitive book on cartoon animation; originally released in its first edition as Advanced Animation; later revised and altered in content because of contractual disagreements and re-released as Preston Blair’s Animation; re-edited and changed in format with tall pages split in half and reorganized to make a horizontal format out of a vertical one (and unfortunately overexposed in repro, losing most of the halftones), and released as Cartoon Animation; and restored to vertical format (but still missing the original, contractually conflicted content) in two volumes as Cartooning: Animation 1 with Preston Blair and Cartooning: Animation 2 with Preston Blair. The second volume is unfortunately out of print and overpriced from many sellers, but you can pick up the horizontal format Cartoon Animation volume to make up the difference.

Despite any of my comments about the disparity between the original and revised volumes (which Mark Deckter makes clear on his blog here and here), this is still far and away the best book available on animation and drawing for cartoons, bar none. (Some younger artists starting on the path of cartoon animation may think of this as “old-fashioned-looking” and hence irrelevant. Oh how wrong you are. When you can draw as well as Preston Blair, come and tell me that.)

One of the great perks here is that the bulk of Preston Blair’s original book, the one with Disney and MGM characters in it, has been posted to the Archive in nice big scans with halftones intact (here and here, in addition to the links in the course – you’ll still want a printed copy to work from, though). This by itself is invaluable (this version of the book is long out of print and incredibly expensive as a rare book); combine it with Kricfalusi’s guidance and other resources and you have the makings of a real cartoon drawing and animation course.

You have to supply the impetus and determination to follow it, of course, but it really is amazing how much knowledge and expertise is here for the taking. (If you find it worthwhile, consider helping to support the Archive for making it available with a donation for a tiny fraction of its real value.)

You say you’re interested in animation and cartoon drawing? There’s enough here to keep you learning steadliy for a full school year or more. Or maybe you want to make your comic book drawing or cartoon illustration more solid, crisp and snappy? What are you waiting for? Pick up your pencil and draw!