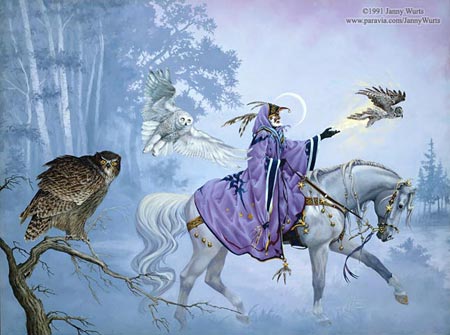 Most illustrators are called upon to interpret and represent the essence of a story. Occasionally, illustrators will venture into writing and, even less frequently, writers will have the skill to add illustrations to their own work. Outside of comics, a medium that seems to lend itself better to the role of author/illustrator, it’s rare to find someone as comfortable in both roles as fantasy author and illustrator Janny Wurts.

Wurts is the author of fourteen novels, including the popular Wars of Light and Shadow series, as well as a collection of short stories; and has co-authored a trilogy with Raymond E. Feist. She is also an award-winning illustrator and her work has been featured in exhibitions like The Art of the Cosmos at the Hayden Planetarium, the exhibition for NASA’a 25th Anniversary, and exhibits of fantasy art at the Canton Art Museum and the Delaware Art Museum. She is also represented in the permanent collection of the Delaware Art Museum with her painting “Dragon’s Run” (which has the honor of sharing a gallery with works by N.C Wyeth, Frank Schoonover, Elizabeth Shippen Green and Jessie Wilcox Smith).

When illustrating the work of other authors, Wurts, like most illustrators, must make an interpretation of what she feels the writer intended. When illustrating her own stories, however, she has the unusual advantage of being in the writer’s mind and knowing exactly what the author envisioned.

Though she also works in science fiction, Wurts is most noted for her fantasy illustrations, and you will find her galleries filled with wizards, dragons, warriors and all manner of enchanted creatures as well as her visions other worlds and times. Her galleries also include sketches and works in progress.

She works directly from a transferred pencil sketch, and paints in oil, and sometimes in oil-alkyd and acrylic.

Wurts is married to illustrator Don Maitz, who I profiled in February. There is a gallery devoted to their collaborative works.

There are also special sections in both artists’ galleries devoted to Stolen Artwork, a disturbing reminder of one of the darker sides of putting work on display. In 1995, 23 works by Maitz and Wurts were stolen from a FedEx truck on the way to be displayed at the World Fantasy Con in Baltimore. The works have been registered with the International Fine Arts Registry, but one of the best hopes for recovery may lie in the continued vigilance of fans and other artists in the event there is an attempt to sell or display the stolen works.