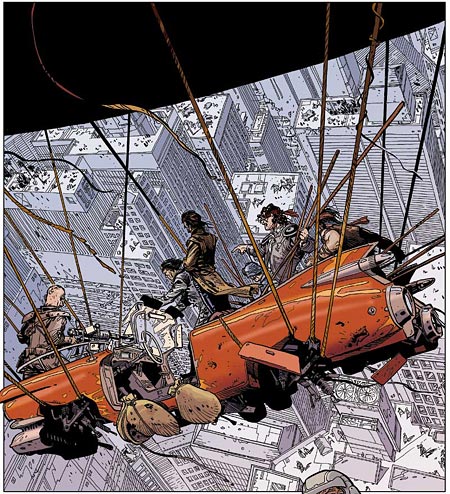 In addition to the multitude of individual artists’ styles in comics art, there are some very broad generalized categories, like the intense stylizations of Japanese manga, the anatomical exaggerations and dynamic action of American super hero comics, and the somewhat more restrained amalgam of styles that could loosely be called “European”, although practiced by comics artists in Europe, the UK, Scandinavia, South America, Australia and New Zealand.

I’m particularly fond of the latter, which is often characterized by a more naturalistic portrayal of people than is usually found in mainstream American or Japanese comics. The figures are often loosely handled, with open line work and quick suggestions of details, and are commonly set against richly detailed backgrounds.

That’s a pretty succinct description of the approach of one of my favorite artists working in the “European” style, New Zealander Colin Wilson (not to be confused with the well-known writer of The Outsider — if you do a Google search, use a qualifier like “comics”).

Colin Wilson, the comics artist, started in his native New Zealand, where he published a comics fanzine called Strips, which included his work and that of several other artists, and is credited with helping to spark a comics revival in the country. He moved to the UK, where he worked for 2000AD on titles like Rogue Trooper and Judge Dredd, alongside such talents as Dave Gibbons, Brian Bolland and Mike McMahon. He later moved to France where he kept up his association with comics greats by working with Jean-Michel Charlier on on La Jeunesse de Blueberry (Young Blueberry), a spin off of the wonderful and immensely popular Lt. Blueberry series by Charlier and Jean (Moebius) Giraud (more on Giraud in a future post).

Just before his stint on Blueberry, Wilson wrote and drew a series of comic albums called Real, Mantell and Alia, part of a series called Into the Shadow of the Sun. I first encountered Wilson’s work in a U.S. reprint of Rael from Acme Press/Eclipse Books (out of print).

Wilson has done some work for the American comics market, including the Point Blank series for Wildstorm. Written by Ed Brubaker, who has been getting good bit of attention lately, Point Blank is not a superhero story, though it features characters from the established Wildstorm Universe, but more of a crime noir saga, a genre to which Wilson’s gritty and casual drawing style is an excellent fit.

There is an interview with Wilson on Newsarama from around the time of that release.

Since then he has worked with French Comics writer Maitz on another crime noir series in Europe, Du Plomb Dans La Tete (literally translated as “Lead in the Head”).

Wilson has recently done more work for the American market: three issues of Star Wars: Legacy for Dark Horse, two of which just published (#9 and #10), the other of which should come out in the another month or so (#13).

If you can’t find those, look for the Trade Paperback collection of Point Blank, or, even better, the Dark Horse printing of Rain Dogs (image above), a story originally printed in short chapters in 2000AD, and reprinted here in the U.S. in the style of a European graphic album: 48 pages, large format, great printing and no ads.

Wilson has a blog, albeit infrequently updated, on which he posts artwork and talks about his projects and other items of interest.