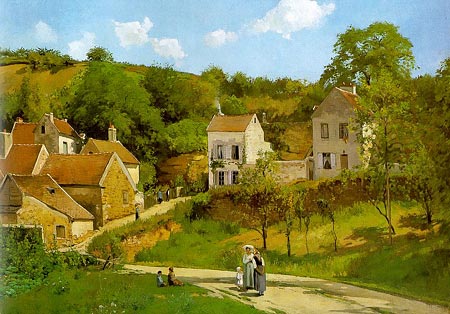 It’s remarkable how much of our picture of history is formed by generalized impressions. There is an impression, for example, that Claude Monet was the central figure around which the revolutionary painting style of French Impressionism formed; as it crystalized out of the pioneering Realism of Gustav Courbetand the incisive directness of Camille Corot and the Barbizon school amid the social turmoil engendered by Napoleon III’s military campaigns and the rebuilding of Paris.

The assumption seems to be that Monet was the “father of Impressionism”, when, in fact, it was Camille Pissaro who was actually called “Père Impressionism” by his colleagues (particularly Cezanne and Gaughan, to whom he was a mentor and father figure), and who was as instrumental in the creation of Impressionist technique and theory as Monet, if not more so.

Like the other painters who would form the group that came to be known as the French Impressionists, Pissarro was a realist landscape painter. He counted among his instructors Jean-Babtiste-Camille Corot, Gustav Courbet and Charles-Francois Daubigny. (Wow, talk about amazing influences!)

With the exception of a brief fling with Pointillism, Pissaro probably remained truest to the Impressionist techniques that he helped to define and refine, and was the only one of the original group to exhibit at all eight of the Impressionist exhibitions. Within the refinement of that technique, however, his restless explorations of methods for applying paint, using brushstrokes, and searching for the Impressionist ideals led him through wonderful variations in color, paint surface and subject.

Pissarro’s brilliant, sparkling canvasses are all that we have come to expect from Impressionist painting, full of those wonderful splashes of pure pigment, energetic brushstrokes, brilliant color, and dazzling light captured from plein air painting in the French countryside.

There is currently a rare opportunity, however, to see Pissaro and Impressionist painting in its nascent stages, when the first colorful buds were blossoming on the tree of French landscape painting.

There is an exhibition of Pissarro’s work, Pissarro: Creating the Impressionist Landscape, curated by Baltimore Museum of Art, that focuses on his early work and the development of Impressionist technique out of his roots in the traditions of 19th Century landscape painting.

The show is only at the Baltimore Museum until May 13th (sorry about the short notice) and then moves to the Milwaukee Art Museum in Wisconsin for a run from June 9-September 9, 2007, and finishes at the Memphis Brooks Museum of Art in Tennessee from October 7, 2007 to January 6, 2008.

For those in other locations, Pissarro’s work is well represented in many museums (including 9 here in the Philadelphia Musuem of Art). You can find a list of museums containing his work on the Artcyclopedia site.

I don’t know if the image shown here, “The Hermaitage at Pontoise“, is in the exhibition, but it’s one of his early paintings and illustrative of the transition from traditional landscape to Impressionism (plus, I just love it). The original is in the collection of the Guggenheim in New York.