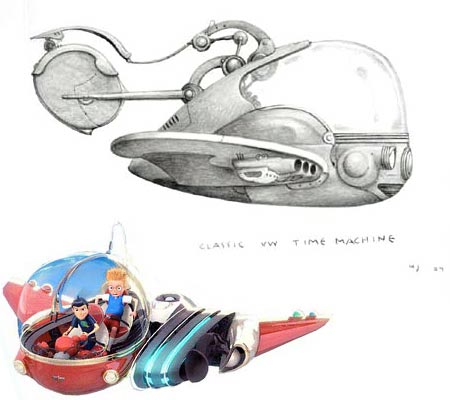 I finally got to see Meet the Robinsons, Disney’s 3-D, 3-D CGI animated feature. (How are we going to phrase that?)

I have to say that I was pleasantly surprised and liked it much more than I anticipated. Part of that is due to the design work, adapted from concept drawings by William Joyce, who wrote and illustrated the children’s book A Day with Wilbur Robinson, on which the film was based.

Joyce is also the author/illustrator of several wonderfully idiosyncratic children’s books, including Rolie Polie Olie and George Shrinks both of which have been adapted for television animation, Bently & Egg, Santa Calls, and the terrific Dinosaur Bob and His Adventures with the Family Lizardo (interior image here).

The production design on the film owes a lot to concept art by art directors Robh Ruppel (who I profiled last October) and David Goetz. Ruppel has finally begun posting some of the production art on his blog, The Broadview Blog. I found some other production art for the film scattered about on the Unofficial Disney Animation Archive and CanMag. There is a small book of The Art of Meet the Robinsons; and you can also see some early production art for the MtR game on San Neilson’s Tasty Art blog.

As much as I like the wonderful 1930’s retro-future, art deco meets the Jetsons by way of Flash Gordon look of the film, I can’t help but think how much better it might have been if the production team had been able to cleave even closer to Joyce’s charmingly quirky production drawings. Word is that the Disney execs wanted to change the title to “Get Lewis”, so you can imagine that they were pressing the production artists to make the design less original and more like other successful CGI features. A lot of Joyce’s originality comes through, but once you apply that standard CGI sheen over everything, it loses some of the visual charm it might have had if it were, dare I say it, a traditional drawn animation.

Joyce is no stranger to concept design for films, having worked on Toy Story and A Bug’s Life as a character designer and Robots as a producer and production designer. There are a few of his wonderfully quirky concept drawings in the beautiful, but unfortunately out of print, oversize book Toy Story: The Art and Making of the Animated Film. (Search alibris. There is also a miniature edition of this title, I don’t know how much of the original it contains.)

Joyce’s site has some of his original concept drawings for Meet the Robinsons, (above) along with some renderings from the final movie (inset) that you can compare. Unfortunately, I haven’t found any kind of gallery of his illustrations or concept art for other films, but I may not have dug hard enough. There is, however, a book called The World of William Joyce Scrapbook, that includes some of his illustrations in the working stages, as well anecdotes about his childhood, sketches and photos.

There is an info page about Joyce on the Harper Children’s site, along with a page about the books themselves. There are some short video interviews with Joyce on the Reading Rockets site.