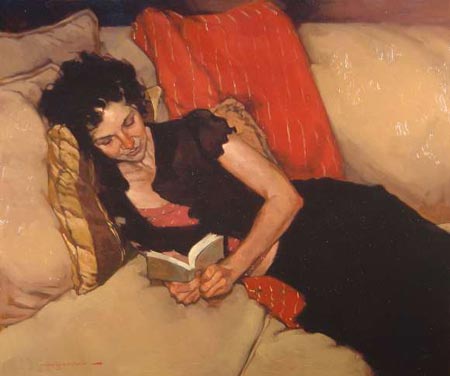 Even though the initial impression of Joseph Lorusso’s paintings is not of bright colors, there is an intensity to the colors and their relationships that makes them feel rich and vibrant.

Lorusso focuses on painting people (though he also paints very nice urban landscapes), and places an interesting emphasis on strong reds in the places in the face where there are extra blood vessels, the cheeks and the end of the nose. This is often contrasted with the sheen of highlights that are almost devoid of color, emphasizing the reds even more. Looking back through his online galleries, reds are a predominant color in many, perhaps most, of his paintings.

His subjects are sometimes formally posed, but more often captured in moments of quiet activity, reading, eating, or, often, embracing. Some of his images seem reminiscent of the Parisian bar scenes of Edouard Manet, others have a feeling of the storytelling and dramatic compositions of classic illustration.

Composition is an important factor throughout Lorusso’s work and he crafts strong ones, with figures angled obliquely through the rectangle of the canvas, carefully chosen areas of color creating bold shapes, and careful attention given to the role of negative spaces. Lorusso lists among his influences Sargent, Sorolla and Whistler, all of whom placed particular emphasis on those aspects of composition.

Lorusso studied a the American Academy of Art and received a BFA from Kansas City Art Institute. He was influenced by early trips to Italy and exposure to the Italian masters. He majored in watercolor and considers his oil painting skills as self-taught, crediting lunch hours spent wandering the collections of the Chicago Art Institute as one of his courses of study.