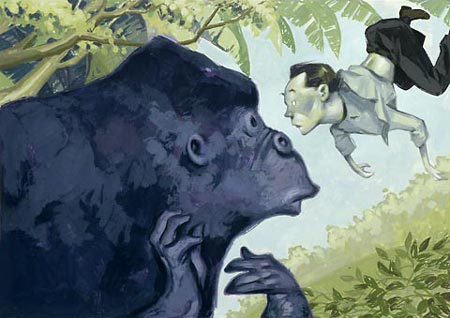 Tim Bower is another of those illustrators whose work I’ve seen and admired, but about whom I can find little background information.

The fact that he is represented by Richard Solomon is a clue that he is in the top echelon of currently working illustrators, but even on Solomon’s site, he is lacking the customary bio.

I do know that he is based in New York, has received recognition from the Society of Illustrators, American Illustration magazine, Communication Arts and the American Institute of Graphic Arts, and his clients include The New York Times, The Atlantic Monthly, Rolling Stone, Entertainment Weekly and Sports Illustrated.

His own site is also lacking in a bio, but fortunately does provide a nice selection of his work, including a number of smaller vignette style illustrations and a selection of his black and white work.

Bower has achieved a solid balance between representational and stylized images, giving a feeling of realism where necessary, but never letting you forget that you’re looking at a painting. His color palette is often muted, at times leaning toward monochromatic themes or interesting impressions of duotone.

There is also a gallery of his work on Workbook. It’s interesting to note that Workbook now has a great feature that lets you zoom way in on the images.