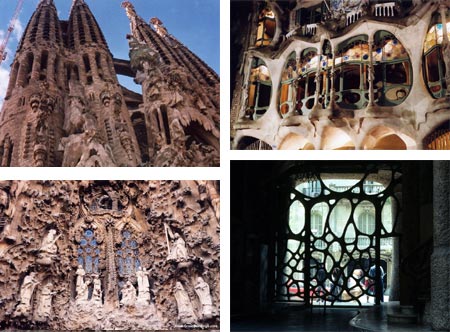 The Art Nouveau style that flourished around the turn of the 20th Century was notable not only for its international reach, but for its influence across many areas of artistic endeavor. The style is familiar in paintings and graphics like those of Alfons Mucha, but was also expressed in murals, mosaics, furniture, glassware, stained glass, jewelry, interior furnishings, and dramatically, wonderfully, in architecture.

Antoni Gaudí, whose full name was Antoni Gaudí i Cornet and is sometimes referred to as Antonio Gaudí, was an architect from Catalonia (an autonomous region in Spain), who can be categorized as Art Nouveau, but whose individualistic style and dramatically different approach can also put him outside the reach of any easy classification and into the realm of the unique.

Gaudí infused his buildings with the graceful curves, parabolas, hyperbolas, flowing style and rich decorative elements in common with other Art Nouveau structures, but went beyond that into an amazing expression of artistic enthusiasm that merged into the surreal. The Surrealists, in fact. felt a kinship with Gaudí, as they did with many artists and architects whose work they felt embodied their search for inspiration in dreams and the subconscious. Dali, in particular, is closely associated with Gaudí and was also a native of Catalonia.

Gaudí’s buildings, though often reviled during his early years (his multi-story Casa Milà was called “La Pedrera” – “the quarry”), are now among the most popular attractions in that region and in Barcelona, where he found patrons for his eccentric designs. His original style developed out of gothic revival, and his most dramatic work, the unfinished basilica known as La Sagrada Família (“The Holy Family”, image above left top and bottom), is an astonishing sculptural monument of gothic cathedral meets Art Nouveau by way of Surrealist hallucination.

His apartment buildings and multi family residences are perhaps less dramatic, but no less amazing for their remarkable originality and strikingly expressive decoration.

One of the sources I’ll point you to for an appreciation of Gaudi’s work is the Great Buildings Online site, which has a good selection of photographs not only for Sagrada Famillia, but for residence buildings like Casa Batlo (image above, upper right). and Casa Milà (“La Pedrera”, image above, lower right).

The thing that sparked me to dig out and complete this post was a MetaFilter post about a couple of YouTube vids of walk-throughs of Gaudí structures here and here.

Gaudi is quite popular and there are a number of beautiful books devoted to his work.

Interestingly, one of the solutions put forward for the new structures at the site of the World Trade Center was a large scale revival of Gaudí’s proposal from almost 100 years ago for a hyperboloid skyscraper in New York called “Hotel Attraction” (post on mirage.studio.7 blog). How cool would it be to replace a monument to commerce, felled by an example of the horrifying impulse to destroy that lurks in the darks of the human mind, with a beautiful, giant inhabitable sculpture, a tribute to imagination and the human desire to create.