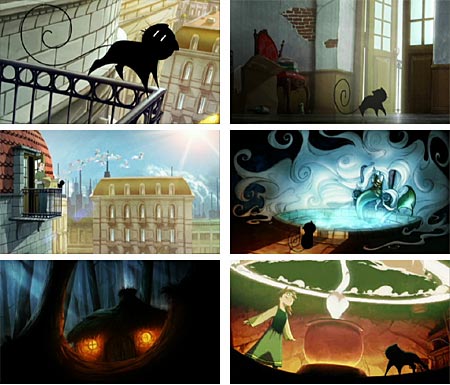 Here’s an animation in progress that bears watching. I learned about October the Cat from Michael Hirsh’s always fascinating Articles and Texticles blog.

The actual name of the film is October le Chat, but despite the French title, the film is being produced in Argentina, and the project’s blog, October the Blog is in Spanish (Google Translate here). The film’s official site is in English, however, with a secondary choice of Spanish, indicating that the producers hope for a wide distribution in English speaking countries.

The blog just started in April and includes some beautiful background images (click on them for the large versions) as well as some animatics.

On the official SiteOctober you can view the trailer (the “large” version is worth the download), link to the blog and read a brief synopsis.

You can also see smaller version of the trailer and animatics, along with the background images, on Catsuka.com.

Though the trailer is wordless, the synopsis promises that October is a “talkative cat” who is on a journey to a place he can’t quite remember. The trailer is a tantalizing display of fascinating and beautifully realized scenes that appear to take October to distant and wondrous places in his quest.

As Michael Hirsh points out in his post, there is a definite influence here from Hayao Miyazaki (which is a Good Thing), right down a scene in which October is flying above the moonlit treetops, accompanying a rider on a broom like a witch’s familiar, an obvious nod to Kiki’s Delivery Service.

Unfortunately, there’s no indication of a targeted release date, and I don’t even know if the film is a short or feature length, though I assume the former as there is no studio name associated with project and it has the feeling of a small-scale labor of love, even though there is a fairly long credit list of contributors. Although Federico Radero is listed first in the credits, none of them are listed as director or creator, indicating that it is either a collaborative effort, or the director/creator is magnanimous about credits.

If October the Cat lives up to the promise evidenced by the trailer and background paintings, it should be well worth the wait; and it will be fun to follow the blog for news and additional images in anticipation.