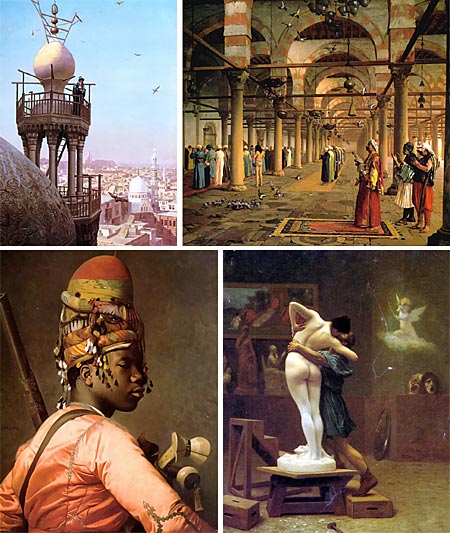 Anyone who is interested in concept art for films or games, particularly if it involves near-eastern themes in games like Prince of Persia, should be aware of 19th Century painter Jean-Léon Gérôme, if you aren’t already.

Likewise, anyone with in interest in Victorian art, the Pre-Raphaelites or 19th Century academic art in general would enjoy Gérôme’s beautifully painted scenes of mosques, minarets and Eqyptian rooftops, as well as his depictions of Imperial Rome.

The Victorian era fascination with the exotic cultures of Asia inspired a number of painters and became known as Orientalism. This was the artistic end of a European view of the near east, and Islamic cultures in particular, as strange, romantic and sensual. The accuracy of such views, and of the scholarly interest in the middle east, was of less importance than the appeal of the foreign and strange to the art buying elite.

Plus, it was a great way to fill canvases with the eye candy of exotic costume, strange customs, and of languorous odalisques and harem concubines, smoking hookahs by reflective pools, or being proffered at slave auctions. There was plenty of that Victorian era titillation in the guise of history painting or allegory, or in this case, acceptance by virtue of the portrayal of other lands or cultures.

Gérôme excelled at the portrayal of these subjects, but at times exhibited an almost National Geographic style reportage of the inside of mosques and cityscapes, in contrast to his more exploitative harem scenes. Prayer in the Mosque (image above, top right), was probably painted from sketches made on one of his many trips to Egypt. The painting is in the collection of the Metropolitan Museum of Art in New York.

At his best, Gérôme was a superb painter and sculptor in the neo-classical style, a student of Paul Delaroche and a teacher of such notable painters as Odilon Redon, Thomas Eakins and J. Alden Weir. At his worst he was an influential enemy of the Impressionists, and almost succeeded in convincing the French government to refuse a gift of 65 of their controversial paintings from Gustave Caillebotte (the bulk of which now form the core of the Musee d’Orsay’s wonderful collection, and a smaller portion of which are here in Philadelphia in the collection of the Barnes Foundation).

Despite his antipathy toward the Impressionists, Gérôme is definitely worth a look for his technique as a painter, and for his interesting subject matter, including a classic scene in the Roman arena, Pollice Verso, which reportedly inspired Ridley Scott to take on the filming of Gladiator, and is generally accepted to be the origin of the “thumbs up/ thumbs down” image we have of the decision of gladiatorial combat, and by extension the use of the gesture in modern times. Another famous image by Gérôme is his two paintings of Pygmalion and Galatea, in which the sculptor’s creation comes to life (image above, lower right).