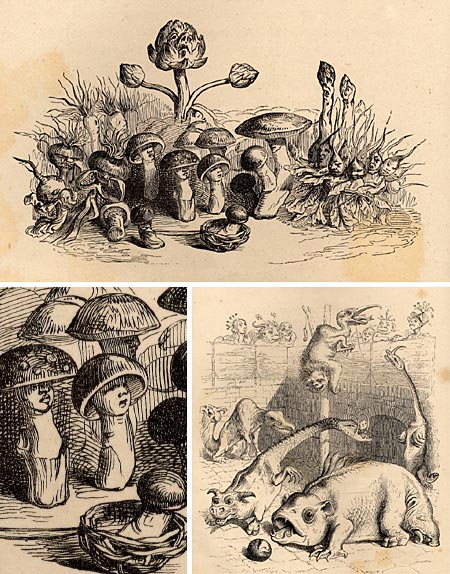 How cool would it be if we could actually see the whole intricate pattern of the influences of one artist on another that make up the brilliant, if ragged, cloth of art history. The best any one individual can hope for is glimmers and flashes of interconnectedness where the pattern reveals a small portion of itself, a brief hint at how the whole is tied together.

Occasionally we see threads that seem connected behind the surface in some way, an indication of a nexus of influence under the cloth, where parts of the pattern are pulled together and rewoven, an indication that some artists are seen more through their influence on other artists than in the wide recognition of their own work.

The more I investigate the work of engraver and illustrator Jean Ignace Isidore Gèrard, more commonly known by his pen name J.J. Grandville, the more I see his influence on other artists. Though he was tremendously influential on artists in his own time and on generations to follow, his own work and name have undeservedly faded almost into obscurity.

Grandville’s brilliantly imaginative pen and ink style engravings from the early 1800’s were one of the seminal sources of modern cartooning, comics and fantastic illustration, as well as numerous styles of fantastic art.

If you’re familiar with the Dadaists and Surrealists, who were quick to extol the virtues of artists they saw as precursors of Surrealism, it’s easy to see how Grandville’s fantastical drawings of griffin-like animal mash-ups, which he called “metamorphoses” and to which he devoted an entire book titled Les Animaux (The Animals), would be enough to put him high on their list; but his fantastic visions of anthropomorphic plants, audiences of opera goers whose heads have been replaced with single eyes, fancies of drawing instruments come alive, mechanical musicians and people with overlarge or tiny heads and otherwise distorted figures made him a shoo-in for the Surrealist hall of predecessors.

Max Ernst, in particular, demonstrates tremendous influence by Grandville in his Surrealist collage-novel (or graphic novel, if you will) Un Semaine du Bonté (A Week of Kindness).

The next thing I discovered about Grandville’s influence on other artists is how dramatically his work informed Sir John Tenniel’s wonderful and definitive illustrations for Alice’s Adventures in Wonderland. Not only was Grandville’s style, treatment and subject matter inspirational to Tenniel in his interpretations of the Alice stories (to the point where Tenniel might be accused of “borrowing” some elements of Grandville’s drawings), I later realized that Grandville’s animal “metamorphoses”, his bizarre characters, anthropomorphic insects, plants and animals, and his visions of fantastic scenes like his tableau of playing cards come to life, were direct inspiration for Charles (“Lewis Carroll”) Dodson himself in writing the stories.

Grandville entertained us with dancing teapots and cavorting flowers a century and a half ahead of Disney. His city dwellers wiith distorted body shapes, often with heads disproportionate to the body, or with exaggeratedly tall and thin juxtaposed with squat and short, showed up both in Mutt n’ Jeff in the early 20th Century and Yellow Submarine in the 1960’s and his steam-powered musicians presaged steampunk by two centuries.

Thomas Nast and the generations of political cartoonists that were to follow, owe more than a nod to Grandville (along with Hogarth and many others). All modern cartoons involving social commentary can trace a thread back to Grandville, and the influence is certainly evident in the underground comix artists of the 1960’s, undoubtedly through the availability of a wonderful Dover book that I’ll recommend to you at the end of the article.

You can certainly see Grandville in the marvelously imaginative and wonderfully drawn fantasies of Heinrich Kley, the sketches of Jan Faust, the fantastic etchings of M.C. Escher and many others.

Some of Grandville’s illustrations can seem tame and ordinary, depending on the phases of his career, but many are wonderful flights of fancy.

Wild-eyed demons in top hats invite angels to dance, celestial garden keepers water both flowers and pedestrians with umbrellas, anthropomorphic lightning rods prepare one another to catch bolts, stage hands raise the curtains of night and use a gas lamp igniter to light the morning sun, an eclipse is revealed to be the result of a passionate embrace of the sun and moon, watched voyeuristically by astrolabes and other celestial mapping instruments, characters ares shown walking across celestial bridges or juggling planets.

Some of his drawings were playful explorations of perspective, many are fantasies of anthropromorphicised drawing instruments, and in fact mechanical devices in general; Grandville was active when the industrial revolution was just getting up steam (sorry, couldn’t resist).

Some are simply incomprehensibly bizarre, others are marvelous images that I can’t fathom the origin of, like the one in which dice, dominos, war medals and Egyptian obelisks grow like rock crystals.

Many of these drawings would be even more powerful if we understood the social context in which they were presented and the follies of which they were meant to satirize. He was engaged in social commentary, and was in that respect essentially a cartoonist, though his drawings are realized with a wonderfully controlled, richly detailed but clearly stated pen and ink like engraving style that would be worth study by anyone interested in creating prints or applying ink to paper (or drawing with the digital equivalent).

Fortunately, Grandville’s terrific drawings are available to modern audiences in several books, most notably an excellent and inexpensive Dover book, out of print but available used, Fantastic Illustrations of Grandville (Dover Pictorial Archives), which I believe is a repackaging of an earlier Dover book, Bizarreries and Fantasies of Grandville, my copy of which is dog-eared with years of delighted use. It collects his two most influential works, Les Animaux, and Un Autre Monde (Another World), which was a story loosely woven to tie together many of his existing illustrations so they could be issued as a book.

The best online source I’ve found for Grandville is on Visipix. Once you get past a pop-up ad and some other annoyances, there is a thumbnail gallery and click-through for 179 of Grandville’s drawings, many of the from scans of his two most famous books, the editions of which, apparently, had hand-applied color on some plates. While clicking through the drawings with the convenient “Next, Previous, Thumbnails” style navigation, you can choose at any time to view them in one of several resolutions, allowing you to breeze through them and then view your favorites in glorious detail. Wonderful!

It’s interesting to note, as this article in Time Magazine points out, that Grandville’s influence extends to the fact that, even though he has been dead since 1847, he has been, along with David Levine, one of the two major illustrators for The New York Review of Books in the 20th Century.