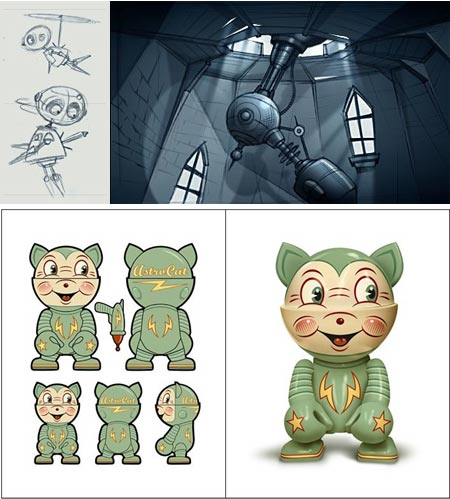 When I first encountered Brian Taylor’s work in 2001 it was in the form of a fascinating project called Rustboy (images above, top row), a web site created to chronicle the progress of his desire to create a CGI animated movie on his own, from concept sketches to final renderings, using only home computer level software.

I have checked back over the years to see little advanced or changed on the site, other than the addition of some spin-off merchandise and a book collecting the concept work for the project, and I was afraid the the movie project itself was, well,… rusting.

It turns out that Brian has turned the notoriety gained from that project (the site was/is beautifully designed and got a fair bit of notice around the web in the early ’00s), along with a fevered imagination, strong design skills and a savvy sense of internet marketing, into a successful line of products and projects; and has handed the Rustboy project off to professionals, giving himself the luxury of overseeing it without having to do the work five people in order to try to bring the character to the screen.

Taylor’s most visible current project is called Candykiller (image above, bottom), and is a series of self-published books offered directly through the Candykiller.com site, and a line of Candykiller figures in the works through Wheaty Wheat Studios. (I can’t give you direct links to the products because the site is in a single Flash file.)

The Candykiller site has a gallery the illustrations from the books, in a style that’s sort of 1930’s animal character cartoons meet Tim Burton by way of Basil Wolverton on a bad acid trip kind of character design that fits into the general area called “Pop Surrealism”. There are other influences, of course. You can see flashes of Rick Griffin, Robert Crumb and other 60’s underground comix artists, and I love his Tales of the Candy Killer mock comic cover homage to the EC Mad comics (see my posts on on Wally Wood and Will Elder), not to mention his hilarious drawing of Godzilla with a Viewmaster for a head. Some of the images are 3D renderings of unreal toys, some are the real figures in production.

There is a nice illustrated interview with Taylor in the new issue of Illo. You can see more of Taylor’s professional work on his XL5 Design site.