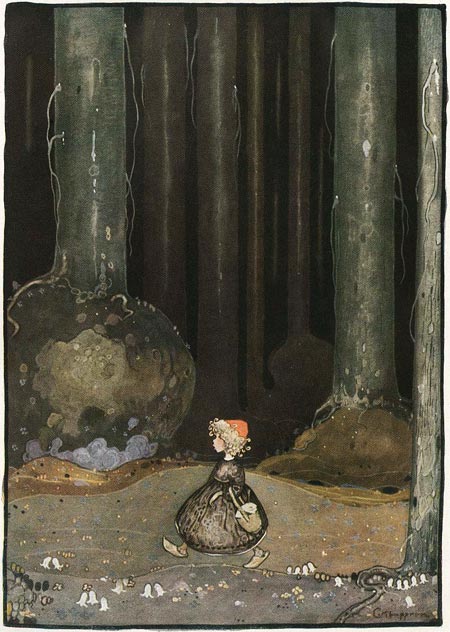 Swedish illustrator Gustaf Adolf Tenggren had his roots (and judging from his illustrations, wonderfully gnarled and knotted roots they were) deeply into the rich soil of Scandinavian myth, and the fertile influence of other great illustrators, most notably the terrific and underappreciated John Bauer, who Teggren succeeded as the primary illustrator for Bland Tomtar och Troll (Among Elves and Trolls), a famous fairy tale themed children’s annual in Sweden.

Tenggren also inherited stylistic elements from other great illustrators who influenced, and were influenced by, Bauer, in particular Kay Neilsen, Edmund Dulac and the amazing Arthur Rackham. Teggren moved to America (though he continued to illustrate Bland Tomtar och Troll from here for six years) and worked illustrating books in a lush, Rackhamish style full of dark, art-nouveau forests, marvelously grotesque trolls, stunning princesses, and wonderfully stylized characters of all kinds.

After a stint at Milton Bradley, the game company, he went to work for The Walt Disney Company and was one of the main concept artists on Disney’s groundbreaking Snow White and the Seven Dwarfs, and contributed significantly to Pinocchio and Bambi.

The amazing Animation Archive has come through again and has posted high-res images from Tenggren’s beautiful Grimms Fairy Tales. Here are part one and part two. They also have a post of his illustrations for Small Fry and the Winged Horse. Click on the images for larger versions. The American Art Archives has also posted some of his commercial illustrations, some of which show Howard Pyle’s influence.

Teggren was an amazing illustrator, but for reasons I haven’t been able to divine, abandoned his beautiful Bauer/Rackham/Neilsen style after leaving Disney and adopted a more prosaic style (to put it politely) for illustrating children’s books. His new style, though dull and lifeless to me in comparison to his former work, was quite successful commercially and he published a series of books with his name in the title, in addition to working on such famous Little Golden Books at The Poky Little Puppy.

He never returned to his previous style after leaving Disney and reportedly destroyed much of his older work (AKKK!). Perhaps he ran into some real trolls at Disney?