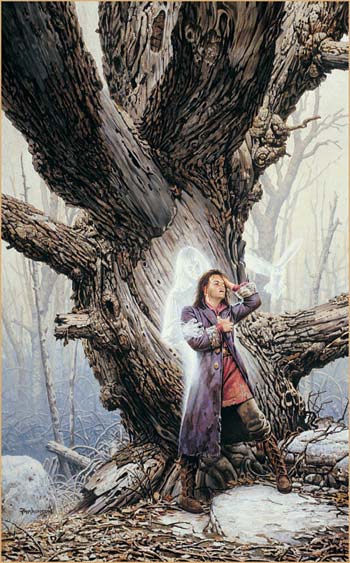 Yesterday’s post, with its image of Gustaf Tenngren’s magically dark forest, put me in mind of another fantasy artist who painted wonderful forests and amazing trees, but with a distinctly diferent style.

Keith Parkinson was an outstanding illustrator and fantasy artist whose life and career were sadly cut short in 2005 at the age of 47 by Acute Myelogenous Leukemia (AML).

He started his career creating posters and then moved into creating artwork for early arcade games. He then went to work for TSR and from that point on created a range of memorable covers, for TSR’s books magazines and game packaging, later for book publishers like Random House, Bantam Books and Penguin Books, and eventually for several companies in the gaming industry.

Parkinson was a superb painter, with a solid grounding in classical painting techniques, one of the few fantasy or science fictions artists I would put in the same class with Donato Giancola in that respect. Giancola, in fact was a good friend of Parkinson’s and it was Parkinson’s wish that Giancola be the artist to finish his last major project, the cover painting for the role playing game Vanguard: Saga of Heroes, from Sigil Games Online, a company for which Parkinson was art director and co-founder.

Parkinson’s images are wonderfully tactile, with a strong sense of place and atmosphere. You can just about reach out and touch the scales on his marvelous dragons and creatures, feel the rough stone of his castle walls, and in particular, place yourself easily in his landscapes.

As you look through his galleries, tear yourself away from the warriors, monsters, dragons and elementals long enough to notice his trees, rocks, mountains and clouds. His terrific sense of texture, feeling for natural forms and command of atmospheric perspective make me think that, had he wished, he could have been tremendously successful as a straightforward landscape painter.

Of course, if it’s fantasy and adventure that you want, Parkinson’s paintings really deliver.

Keith Parkinson’s web site is being continued and maintained by his family, much to the delight of fantasy art fans everywhere, who appreciate the ability to continue to view his work online.

Link: www.keithparkinson.com
Artcyclopedia (links to other galleries and resources)

One Reply to “Keith Parkinson”