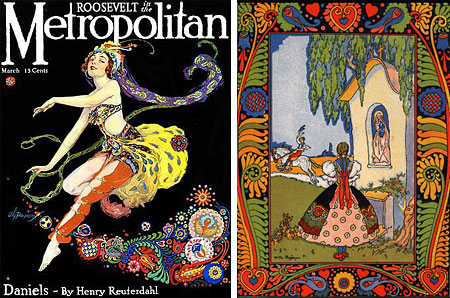 William Andrew Pogany, called “Willy”, was a prolific Hungarian born illustrator, active around the turn of the last century, who illustrated over a hundred books. Most were children’s classics like Arabian Nights, and Mother Goose, even Alice’s Adventures in Wonderland, but also included less common titles like the Bhagavad Gita and the Rubiat.

Before coming to the US in 1914, he studied in Budapest, Munich and Paris, and lived in London for 10 years where he illustrated four titles that were considered his masterpieces, Colridge’s The Rime of the Ancient Mariner, Wagner’s Tannhauser, Parsifal and Lohengrin.

Pogany worked in a fluid Art-Nouveau influenced style that varied widely throughout his career. He seemed to alter his approach at will to suit the subject matter. His prints for Tisza Tales (above, right) are reminiscent of Ivan Bilibin. He also did a variety of commercial and editorial work for periodicals (above, left).

Pogany designed stage sets for the Metropolitan Opera and various Broadway productions in NY, painted murals, did art direction for movies, including uncredited work for the 1932 version of The Mummy, created architectural designs, did sculpture and, in his later years, portraits, including subjects like John Barrymore and Carole Lombard.

VictorianWeb has Pogany’s Rime of the Ancient Mariner posted online, but it’s not very satisfying. Like much of the Gutenberg Project, and the Willy Pogany archive from the University of Pennsylvania Library, it suffers from the apparent unwritten rule that public domain books posted on the web must have poorly scanned and badly reproduced versions of the illustrations.

It’s unfortunate, because his pen and ink illustrations are particularly good, but I’ve found few on the web that are reproduced well enough to get an idea of what they really look like, here’s one.

Pogany also authored a number of books on painting and drawing techniques. I first encountered Pogany in the wonderfully inexpensive Dover Books reproduction of his classic The Art of Drawing. Though perhaps not as thorough or authoritative as Loomis‘ Figure Drawing for All it’s Worth, it is still a terrific resource for any comic book artist, illustrator, animator or other artist interested in constructing the figure.

His figures have a touch of designerly, Art Nouveau charm that the more straightforward instructional drawings from Loomis and Bridgeman lack. You should be able to find some of his other illustrated books from Amazon and other sources.

One Reply to “Willy Pogany”