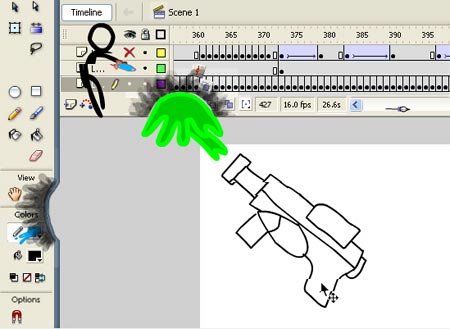 OK, I have to admit that this is something I find particularly appealing for a number of reasons, and may not appeal to everyone to the same degree, but I can’t help enjoying it as much as I do.

First of all, I’m a sucker for comics stories or animations in which the artist interacts with his or her creation. One of my all-time favorite Warner Brothers cartoons, for example, is Duck Amuck, in which Daffy is tormented by the hand, pencil and eraser of the unseen animator.

Animator vs. Animation, a Flash animation by Alan Becker, is a kind of reversal on that notion, in which the animator’s creation gains a will of it’s own and engages him in a battle for control.

The particularly delightful thing for me is that the battlefield on which this conflict is played out is the Flash application interface itself. As someone who works in Flash, and in fact teaches it, I took great delight in seeing this familiar set of tools, palettes, timeline, and controls deconstructed in a battle between the artist’s stick figure character, initially labeled “victim”, and the artist, cleverly represented by the mouse cursor.

In spite of some of the Flash-specific references and in-jokes, I think anyone can appreciate the general idea and the entertaining way it’s presented.

Apparently, the animation has been successful enough that Becker has revised it, and followed it up with a sequel, Animator vs. Animation II, in which he has given his protagonist (antagonist) more power, in anticipation of a greater challenge, and the battle rages well beyond the Flash interface.

He says in the introductions to the two animations that the first one took him three months to complete; the second one, five months.

Becker doesn’t seem to have a web site, instead posting his animations and other projects to his deviantART space.

One of the other items on his page is this quite nice acrylic painting of his own home-grown watermelon. There are also other drawings. His brief bio indicates that he is only 18 and plans to attend the Columbus College of Art and Design and pursue a career in art. Something tells me we’ll be seeing more from him as time goes on.