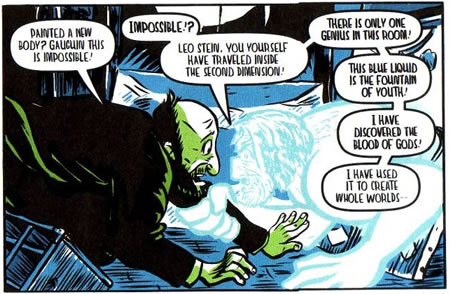 One of the great things about the burgeoning independent comics scene here in the U.S. is that a wider readership is beginning to see beyond the narrow cliché of “comics = superheroes” that has dominated the public’s general perception of what comics are, and open their eyes to some of the wider possibilities of the medium.

Comics (graphic stories) are a terrific place, for example, for cultural mash-ups, and a wonderful case in point is Nick Bertozzi’s “art history by way of noir murder mystery with a touch of supernatural fantasy graphic novel”, The Salon.

Set in the pre-modernist cultural stew of Paris 100 years ago, the story pulls together protagonists like Picasso, Braque, Gertrude Stein, Leo Stein, Erik Sati and Guillaume Apollinaire in a fantastical murder mystery, in the course of which we are given the birth of Cubism revealed in discussions on a train and scrawls on a napkin.

Bertozzi weaves his tale in horizontal panels, giving it a somewhat cinematic consistency, and throws his images at us with brusquely drawn, rough edged ink lines, at times using intentional crudeness to push them in our face, at other times pulling back into woodcut-like refinement, and casts them in hauntingly expressive duotones.

His story, likewise, swings from from refined to crude, from intellectual ponderings on the nature of art to sex scenes and the scatological details of Georges Braque squatting on a chamber pot. Throughout it all, Bertozzi makes it abundantly clear that this particular story could not have been told effenctively in any way other than the unique synergy of words and pictures that we call comics.

You can read the first few pages online here (though the link for the fourth one seems broken at the moment), and a few others in the course of this interview with Bertozzi on The Comics Reporter; or you can watch a short promotional video. The fact that a “trailer” for a comics story feels natural points up the often mentioned relationship between comics and film. There is also a short film linked from Bertozzi’s site on The Making of Salon.

Ths comics page on his site features glimpses at some of Bertozzi’s other stories, including his recent collaboration with Jason Lutes, Houdini: The Handcuff King (the first title released under the auspices of The Center for Cartoon Studies), Drop Ceiling, an ongoing story originally serialized in Rubber Necker, and another history-based story, this one closer to actual history, of Ernest Shackelton.

Bertozzi also has illustration clients that include The New York Times, Fortune, SPIN Magazine and others. In addition he teaches a Comicbook Storytelling Workshop at the School of Visual Arts in New York.