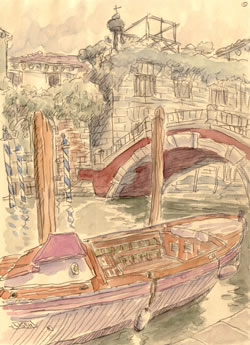 I’ve mentioned Enrico Casarosa before. A multi-facetied artist who does storyboards for Pixar, but is also a character designer, comics artist, designer, illustrator, blogger and dedicated sketcher. Casarosa is the instigator of the Sketchcrawl drawing events.

Last summer Casarosa took a trip to Veince, that most magical of Italian cities, and instead of just making travel sketches as most artists might, decided to chronicle his trip in the form of a comics journal.

As always, available time became a factor and, while he couldn’t document his entire trip during his stay, he decided to continue telling the story after the fact, extending his narrative into the next winter and beyond. The result is a wonderful stream-of-consciousness style story, not only of his stay in Venice and his visit to his childhood home in Genova, but of his attempt to chronicle the story in comics form, artistic blocks and all.

His story wanders from cut-away views of a Venitian apartment to similar views of his parent’s home, to the streets of both cities and the canals of one, to his ruminations on Hugo Pratt’s famous comics series, Corto Maltese, which takes place in Venice.

The artwork varies from quickly suggested cartoon-like characters to nicely drawn images of scenes he encountered in Venice and Genova, to renditions of the masterworks he saw in the Gallery Academia.

From the introductory page, click to launch the story in a pop-up, which you can then click through in sequence until you get to the limit of that section’s thumbnails, at which point you will no longer have a forward arrow available. You must then close the pop-up and click to the next page of thumbnails to continue.