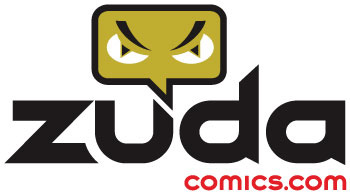 In the 12 years or so that I’ve been drawing webcomics, I’ve continued to be stupefied by the monumental cluelessness of the major comics companies (with the possible exception of Dark Horse) in regard to online comics.

It took Marvel and DC four or five years to even acknowledge their existence, they never seemed to get that this was a whole new branch of the comics medium, if not a new medium in itself; and, since they couldn’t figure out how to make money off of web comics directly, merely used their half-hearted and unimaginative forays into the field as shills for their regular print stuff.

When I heard that DC Comics was starting a new “web comics imprint” called Zudacomics.com, I assumed that this was more of the same. It turns out though, that it’s a bit different and, thankfully, at last, a bit less clueless.

Modeled on the notion of a webcomics portal, an idea that numerous independent sites have been exploring for eight or nine years, Zudacomics.com is touted as a home to multiple online comics that will be culled from work submitted, and voted on, by the site’s visitors.

The key and clueful difference here is that the chosen creators will then actually be paid, receiving commissions for a year’s worth of work (though what that actually means isn’t stated), and have their creations published in print as well.

Another hopeful sign of cluefulness is the format. DC is asking that the submissions be in 4:3 aspect ratio, not quite modern computer screen dimensions, but close enough, and something that the “big two”, and even a large number of current webcomics artists, haven’t quite gotten, instead forcing readers to scroll through vertical print-comics format on the horizontal screen.

The real sign of cluefulness, however, is their statement that the content will remain creator-owned; but before we get too warm and fuzzy, read Todd Allen’s thoughtful analysis on Comic Book Resources. You can also read the New York Times’ more rosy announcement.

DC is evidently throwing some money at the project, hiring IBM to build a dynamic, back-end driven site, though how they intend to make money on the venture is still unclear.

The Zudacomics.com “teaser site” doesn’t include much detail yet, just the press release, a brief overview of “the deal“, some logos and a “stay notified” sign-up. They will be rolling out information over time, with the scheduled launch for the content site slated for October.