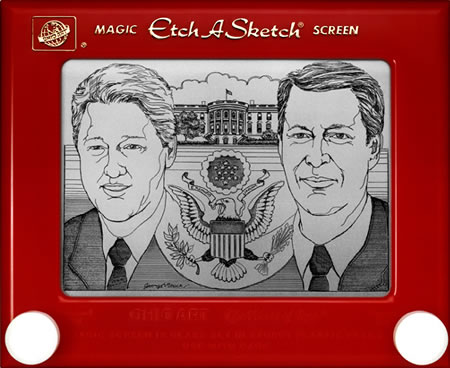 Short of crayons, maybe the Etch-A-Sketch, which turns 47 this week, has earned it’s tagline of “World’s favorite drawing toy”.

We’ve all done it, right? Artists and non-artists alike, twirling the little plastic knobs, trying to make diagonals and curves, which was a little like patting your head, rubbing your stomach and chewing gum at the same time, trying not to backtrack, striving to make something cool out of that single continuous line, and, finally, resolving ourselves to drawing things like buildings and robots that looked good in straight lines.

Of course, you could always turn it upside-down, shake the mysterious gray stuff (which turns out to be powdered aluminum), to “reboot” your Etch-A-Sketch, erasing all signs of failure, and have at it again.

Well, some of us persevered, learned the curves, and mastered the thing. A striking case in point is George Vlosich, etch-A-Sketch artist extraordinaire, who demonstrates on his site that he can do a lot more than draw diagonals and curves, creating detailed portrait drawings with complex compositions and rendered tones.

Lest we doubt that these drawings were, in fact, created with the aforementioned knob-twirling device, Vlosich has a demo video on YouTube in which you can see a time-lapse movie of him in action.

Ohio Art, the company to whom inventor Arthur Granjean sold the idea for the Etch-A-Sketch after being turned down by several of the major toy companies, doesn’t seem to be making much of the anniversary, but there is an article on Wired with a gallery of Etch-A sketches by Vlosich and others (including a computer adapter – “machine draws with machine, film at 11”).

You can also look at the World’s Largest at SIGGRAPH 2006 or try your hand a a virtual Etch-A-Sketch,like this one from BabyGrand.com or Etchy.org (note that these allow you to use the keyboard). Of course the Etch-A-Sketch has a presence in the Blog-O-Sphere, at blogs like The Etch-A-Sketchist, which has a list of other links.