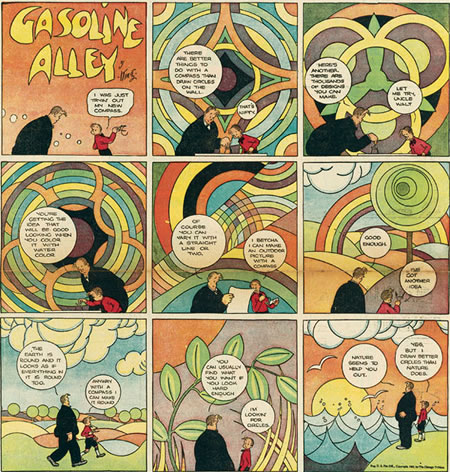 In 2005 Sunday Press Books published a remarkable collection of Little Nemo in Slumberland, Winsor McCay’s astonishing early 20th Century comic strip, printed at the size of the original full page newspaper comics. (See my post on both McCay and the book.)

Thanks to the risky but brilliant choice of format, So Many Splendid Sundays is a revelation. It is the comics equivalent of the cleaning of the Sistine Chapel, a great masterwork revealed in the way it was meant to be seen.

Well, you could start with another masterful comics creation, particularly one that has been under-appreciated, even by those of us who treasure the great classic newspaper comics, and give it the same eye-opening full-size newspaper page treatment.

Sunday Press Books editor/publisher Peter Maresca has done just that with the release of Sundays with Walt and Skeezix, featuring the innovative and beautiful work of Frank King on his landmark strip Gasoline Alley.

Gasoline Alley was a deceptively quiet slice of life comic started by King in 1918. Like George Herriman’s Krazy Kat, Gasoline Alley was a secondary feature that rose to be the artist’s main opus. Originally a single black and white panel in the Chicago Tribune’s catch-all Sunday page called “The Rectangle”, the original premise was simply characters talking about automobiles, which were something of a newfangled contraption at the time and the object of much tinkering and discussion. The panel and its characters gained popularity and the title went to a full strip with a full Sunday Page.

Over time, instead of featuring the normal comic strip conventions of gags or adventures, Gasoline Alley developed into a series of gentle, subtle slices of american life. Several years into the successful run of the strip, the Tribune asked King to broaden the appeal to women, so King brought a family to his main character Walt Wallet, a confirmed bachelor at the time, by having a baby left on his doorstep. Little Skeezix (according to Wikipedia, slang for motherless calf), called his adopted father “Uncle Walt” and became the second star character.

Skeezix also started one of the more remarkable attributes of Gasoline Alley. Most authors of continuing stories, in comics or other mediums, are reluctant to let their characters change and age, not wanting to lose a good thing, so they suspend them in a kind of no-time, in which events happen, but the characters remain roughly the same age. In Gasoline Alley, Skeezix and the other characters began to age, in more or less real time, growing older, going through the phases of their lives like real people and passing the torch new young members of the family. Remarkable.

The strip is still going today, carried on by “descendents” in a way. When he retired, King handed the Sunday strip to Bill Perry, who he had found in the Tribune’s mail room and made his assistant, and the daily to Dick Moores, who had been Chester Gould’s assistant on Dick Tracy and put his own unique stamp on the strip, in some ways reinventing it and making it his own. Moores took over the Sunday too when Perry retired and he, in turn, passed the strip on to his assistant Jim Scancarelli, who writes and draws it today.

Though each has their own approach, they, and many other cartoonists and comics artists, were influenced by King’s clear, spare but richly imaginative drawing style.

King’s drawings, in fact, were influential on the European comics artists like Hergé who would refine the ligne claire style, the influence of which would come full circle to contemporary American comics artists like Chris Ware, who contributed to the Drawn & Quarterly collections of Gasoline Alley a few years ago and has done the book design on the new Sundays with Walt and Skeezix volume.

King was obviously influenced and impressed by McCay’s sublime fantasy in Little Nemo (and who wouldn’t be), and his stories of family life were peppered with dream sequences and flights of fancy in which he let his pen and imagination roam freely.

The Sunday Press book, though I haven’t yet had the pleasure of seeing it in person, focuses in particular on some of King’s more imaginative and innovative strips and promises to be an absolute treat.

At $95 it may seem pricey for a comics collection, even a great one, but keep in mind that this is the wide screen, high definition, Imax version of comic strips. Until you see one of these volumes, you don’t realize what a difference size makes.

The book can be pre-ordered now and ships in August. I don’t know if the publisher is better prepared to meet demand this time, but the first printing of the Little Nemo book sold out quickly and the second printing wasn’t available for months.

Ironically, the sample strips displayed on the Sunday Press Books site are too small to read and get a real feeling for the beauty of the art. Here’s an (unfortunately watermarked) image of an original Sunday from Library of Congress exhibit of comic strips, another image of a printed Sunday page from the FamilyLosAngeles blog, one from MarkStaffBrandl.com; and you may find more through an image search.

Here’s the page shown above posted larger, and another, on the site of the Tate Museum from their online magazine’s excellent essay on The Real Comic Book Heroes.