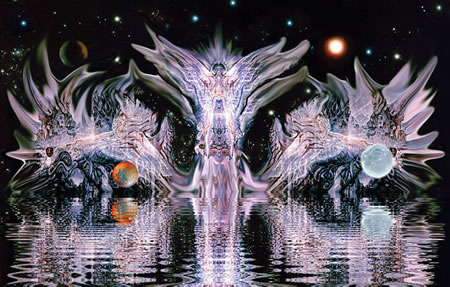 When I first saw Robert Venosa’s work reproduced on the web, I wondered if it was done digitally. Though he has recently begun to work in digital media, most of his paintings are in tempera and oil on board, utilizing the “Misch Technique” of Hubert and Jan Van Eyck that he was introduced to when studying with Mati Klarwein and Ernst Fuchs.

This technique begins with a bright tempera underpainting over which is laid a series of thin oil glazes that allow light to pass through several layers of translucent color and bounce off the underpainting and returning through the layers before returning to the eye. This is something that you find in many old master paintings that does not reveal itself in photographs.

His images are striking arrangements of rounded, translucent, vaguely organic forms that morph and blend into one another like melting liquid crystal. These are sometimes arranged as “landscapes”, sometimes as fields of dimensional forms and other times as objects, occasionally suggestive of faces, as in his painting titled “Hallucinatory Self Portrait”.

Sometimes his objects can have deliberately plant-like forms, at other times they are blocklike, filled with striations and crinolations that give suggestions of rounded rock formations, the intersection of microscopic cells or flows of solidified air currents.

Venosa’s paintings have ancestors in the Surrealist “landscapes” and polymorphous objects of Yves Tanguy and the wonderful decalcomania inspired visions of Max Ernst. You can also see the influence of Salvador Dali, with whom Venosa became acquainted when he moved to Spain. It was reportedly Venosa who introduced H.R. Giger to Dali.

I also see a similarity in Venosa’s work to certain work by Jean “Mobius” Giraud, though there it’s difficult to tell which way the influence flows. Venosa has also done some collaborative work with digital artist Stephen Miller of Mkzdk.

Venosa has applied his visionary images to concept art for movies like Dune and Fire in the Sky, and the upcoming IMAX film, Race for Atlantis.

Unfortunately, as is often the case, the images on Venosa’s web site are too small to get a good feeling for the work. You can find somewhat larger ones on The Society for Art of the Imagination, this unofficial gallery and the beinArt Surreal Art Collective.

There is a listing in the beinArt Surreal Art Blog about a solo exhibition of Venosa’s work at the Feneiro Gallery in Eugene Oregon from July 6 to August 2nd, 2007.

Addendum: I received a notice that Robert Venosa, and his wife Martina Hoffmann are conducting a series of workshops on Visionary Painting, the latest of which will be held this November 24th to 30th in Boulder, Colorado.

Addendum II: A new new collcetion of Venosa’s work, Robert Venosa: Illuminatus (Amazon link) has just been published. You can read more details on his site.