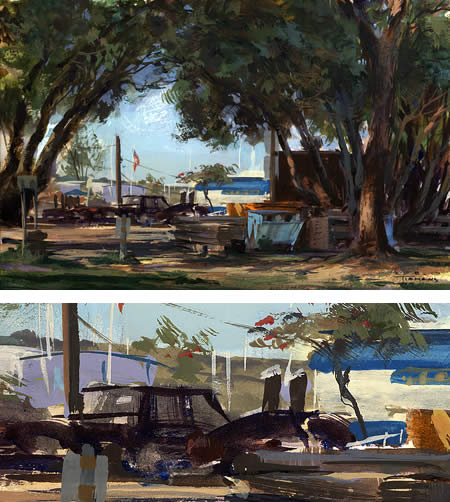 Erik Tiemens is a concept artist and designer working for LucasFilm who also does gallery paintings in oil and gouache, as well as digital sketching.

I first reported on Tiemens in September of 2006. Since then his web site doesn’t look like it has gotten a great deal of attention (there is still a promise of Star Wars Episode III concept art to be added in April 2005 in the Concept Art gallery), but he has been maintaining a more frequently updated blog entitled Virtual Gouache Land.

In the blog Tiemens posts landscape sketches, sometimes digital, but often in gouache. The images are usually linked to larger versions, big enough to get a real feeling for the works, which are generally small-scale to begin with, and to see his wonderfully succinct notation of complex forms (image above, top, with detail, bottom).

He usually annotates the images with a brief description of the time and place, and sometimes the process, indicating when he is trying out new paints or other materials.

In contrast to small watercolor paintings or gouache sketches by many contemporary artists, Tiemens’ work has a flavor of the early watercolor artists of the Barbizon school, and English landscape artists like Turner and Constable. His small images, and digital paintings, are often dark overall, punctuated with brilliant patches of light poking through roiling clouds or the dark canopies of trees.