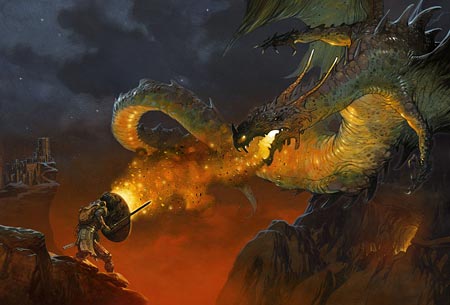 French illustrator Vincent Dutrait is well known in France and Asia, particularly in fantasy and role playing gaming circles, but not very familiar here in the U.S.

Dutrait was born in Provence and now lives and works in Seoul, South Korea. He cites inspiration from great American illustrators of the Brandywine school like Howard Pyle and N.C. Wyeth, as well as contemporary fantasy artists like Jean-Michel Nicollet, John Howe and Angus McBride.

His web site is in French, but it’s not difficult for non-French speakers to navigate. Most of the major sections have alternate names in English and the rest isn’t difficult to figure out.

The “News” section is essentially a blog, with articles arranged by date, on which he posts and discusses some of his most recent work. You can see a sort of overview of his work in the Essential section of the Galleries.

Thought he he best known for his illustrations for role playing games and fantasy, adventure and science fiction, some of his most interesting work in in the illustrated books section; with galleries of illustrations for titles like The Knights of the Round Table, Robinson Caruso, Treasure Island, Alexander the Great, and The Count of Monte Cristo, which show his interest in classic stories, historical illustration and the traditions of the illustrators of the Brandywine school.

The info section, like most of the site’s text content, is in French, but you can try a Google Translate version.

There is also a section of wallpapers where you can find nice high-resolution images that make it easier to see the detail in his work.

I don’t know much about Dutrait’s working methods, the promised page of tutorials has some image linking problems. Addendum: Vincent has written with direct links to the tutorials and the image links have been refreshed, there are tutorials on: Scanning large illustrations, Preparing the surface and Completing the image. The tutorials are nicely done, with enlarged details.

It looks to me like he starts with a pencil drawing and then applies color in a way that leaves some of the pencil to show through as line and texture. Addendum: on viewing the tutorials, I can see that he is working, in this case, in acrylic over an ink drawing, adding some textures and details with colored pencil.

Texture plays a prominent role in his style, and is one of the most appealing aspects of his work, with a frequent use of color hatching, somewhat similar to the way color is applied in egg tempera. A lot is accomplished with suggestions of texture, a few strategically places areas of alternate color within a larger area can give your eye the feeling of a much more complete texture.

If you compare some of his drawings to his finished work, you can see where I get my impression of his working process, which leaves much of his work with an appealing feeling of being somewhere between drawing and painting.