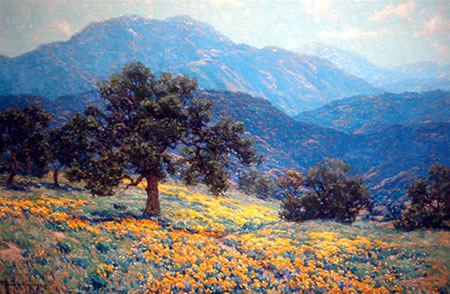 Granville Redmond was born in Philadelphia in the early 1870’s. He became deaf as the result of a bout of scarlet fever when he was around three, and his family moved to California, perhaps prompted by the opportunity afforded their son at the Berkeley School for the Deaf (now the California School for the Deaf). There his artistic inclinations were encouraged and he went on to study at the California School of Design in San Francisco.

He won a scholarship from the California School of the Deaf that allowed him to travel to Paris and study at the renowned Academie Julian, and had a large canvas accepted at the prestigious Paris Salon.

Though he came to California and to painting by a different route, his influences and painting excursions around California put him in the company of the other turn of the century California plein air painters, who are often referred to as “California impressionists” (see my posts on Guy Rose and Hanson Puthuff).

Like some of the other California painters, Redmond encountered the state’s amazing broad valleys carpeted with great expanses of yellow and purple California poppies.

Redmond responded with large, vibrantly intense canvasses overflowing with unusual admixtures of hues. These are contrasted with his darker, moodier paintings of overcast or misty days and subdued nocturnes.

While living in Los Angeles Redmond encountered and became friends with Charlie Chaplin, who was fascinated with the expressiveness of American Sign Language, and asked Redmond to help him develop some of his silent movie pantomime techniques. Chaplin became a patron of Redmond, provided him with a studio on the movie lot while they were collaborating, collected his paintings and featured him in small parts in his movies; notably as the sculptor in City Lights.

Redmond’s work was compared to that of Monet and Pissarro, but, like most of the American painters influenced by French Impressionism, he went his own way.

There is a fairly extensive gallery of Redmond’s work on Steven Stern’s California Paintings gallery site. Unfortunately, navigation is by way of “too clever for their own good” ASP and JavaScript tricks, so I can’t give you a direct link. Go to this page and then choose Granville Redmond from the alphabetical list.

This is a commercial gallery and some of the images are marred with an unnecessarily obnoxious little “SOLD” banner that looks like it belongs on K-mart prints (and could be below the image rather than on top of it if they wanted to show respect for their artists), but the marking isn’t large and you can still get a good feeling for Redmond’s paintings.

There is also a commercial gallery called the Granville Redmond Gallery that deals in his paintings, but while the site has some bio information, it is lacking in images.