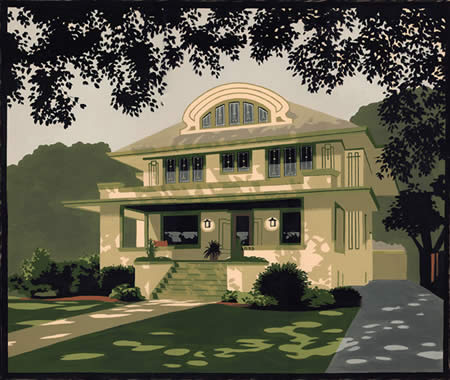 I first came across Laura Wilder’s unusual “house portraits” when doing research a year or so ago for a project I was working on with FusionSpark Media called the Florida-Friendly Interactive Yard.

I was looking for reference on various styles of rendering houses and I was struck by Wilder’s approach.

Though she sometimes uses watercolor or pen and ink in a more conventional way, many of her images of houses are done in gouache in a simplified, graphic style similar in appearance to woodblock prints. The ability of gouache to lay down flat tones, which has made it a favorite of illustrators over the years, is perfect for this application.

Working from photographic reference, Wilder manages to abstract (in the original sense of that word) the essential shapes in an image into areas of graphic color that are similar to the flat areas inherent in the nature of block printing.

In some of the detail images in her section of portraits, she shows the reference photos next to the finished piece.

Her approach is very influenced by the graphic style and subject matter of the Arts and Crafts movement from the turn of the last century, and she also has galleries of posters and prints in that vein.

She pays particular attention to artisans and craftspeople, and seems to feel a closer kinship with them than with the traditional art world. One of her galleries is devoted to depictions of artisans at work.