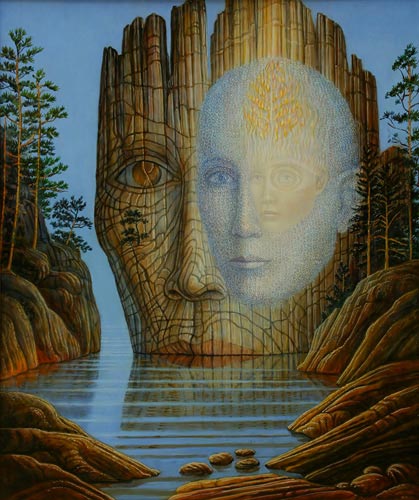 Visionary artist Brigid Marlin was born in Washington, D.C., studied in Dublin, Paris and New York, and now lives and works in London, England. She eventually travelled to Vienna, specifically to learn the Mische Technique, a painstaking Renaissance painting method in which an ink drawing and detailed egg tempera painting form a basis on which layers of oil glazes are built into the final image.

The particulars of this old master technique, once thought lost, were revived by visionary artist Ernst Fuchs. (See my recent posts on Robert Venosa and Martina Hoffmann.) Marlin has a step-by-step demonstration of the technique on her site.

The galleries on Marlin’s web site vary from straightforward portraits, painted in the Mische Technique, to Visionary Paintings to Fantasy Portraits, where the two approaches collide.

Even her straightforward portraits can’t help but have a touch of atmosphere that has drifted in from the other worlds that Marlin frequents, infusing them with a touch of secret strangeness, as in this beautiful portrait, Girl in Bluebell Wood.

Marlin has painted portraits of several notable individuals. She was chosen as the first artist to paint an official portrait of the Dalai Lama, for which there is a fascinating story accompanying the images of the painting on her site. Her portrait of J.G. Ballard, an admiring quote from whom forms the introduction to Marlin’s site, hangs in the National Portrait Gallery in London.

Unfortunately, Marlin’s own site may not be the best representation of her work. While there is a variety of her images, they are reproduced too small to get a good feeling for the detail and textural qualities of her work. (Though it’s worth noting that when in the gallery for Visionary Paintings, it’s easy to miss the text links at the top to galleries for two additional series of paintings.) There is a page of available giclee prints as well as a listing of available books.

I’ve listed below some other places on the web that you can see Marlin’s work. The largest reproductions I’ve found are on the Surrealism Now! site.

Brigid Marlin is also the founder of the Society for Art of the Imagination, the web site for which contains an extensive array of galleries of works by the society’s members, including a gallery Marlin’s work.

Though can see the bloodline of her visionary paintings reaching back through surrealist painters like Dali and Magritte (and perhaps even to Giorgio di Chirico), she becomes most intriguing for me when you can see her affection for Renaissance masters like Botticelli and the influence of underappreciated Surrealist greats like Paul Delvaux.