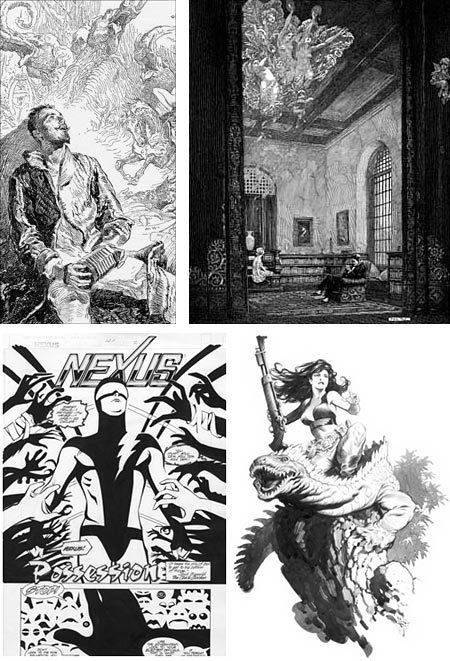 Flesk Publications is a small publisher specializing in art books, and particularly in titles that would be of interest to many lines and colors readers.

I first wrote about Flesk two years ago as one of my first posts for lines and colors. At the time the focus of Flesk’s publishing efforts was on two of the greatest pen and ink illustrators ever to put pen to paper, Joseph Clement Coll and Franklin Booth.

Since then, the line of titles has been expanded to include contemporary comics artists Mark Schultz and Steve Rude as well as illustrator and gallery artist James Bama.

Flesk’s book on Booth, Franklin Booth: Painter with a Pen, has itself been out of print for a little while, but has recently been republished and is again available. For fans of this amazing illustrator, whose unique approach to pen and ink has never been duplicated, this book is an excellent collection and a nice compliment to Franklin Booth: American Illustrator, a title I have previously recommended from Auad Publishing. There is a gallery of Booth’s work on the Flesk site, though the Booth gallery on the Auad site is more extensive, with larger images, and and offers a better introduction to Booth’s work. There is virtually no redundancy between the Flesk and Auad books, and both are superb.

Flesk has just released the third in a series called Mark Schultz: Various Drawings. All three editions are full of beautifully rendered drawings by this contemporary comics artist, whose work shows the influence of great comics artists like Wally Wood, Alex Raymond and Al Williamson.

Due for release in November is a new book, Steve Rude: Artist in Motion. Rude is also a a contemporary comics artist, known for his work on Nexus, a very unique take on the idea of costumed heroes, co-created with writer Mike Baron. Rude also shows the influence of great comics artists and illustrators, like Russ Manning and Andrew Loomis.

In the works are a book on Gary Gianni’s work on Prince Valiant and a new storybook by Schultz. You may still be able to pick up a copy of the recent issue of Illo, in which publisher John Fleskes interviews Mark Schultz.

There are also short interviews with Schultz (also here) on the Flesk site about the book projects.

There is a 2006 interview with Fleskes by Bill Baker on World Famous Comics.

Fleskes also mantains a blog with infor about the Flesk Publications projects and other topics of related interest. There a separate News section on the site.

One Reply to “Flesk Publications (update)”