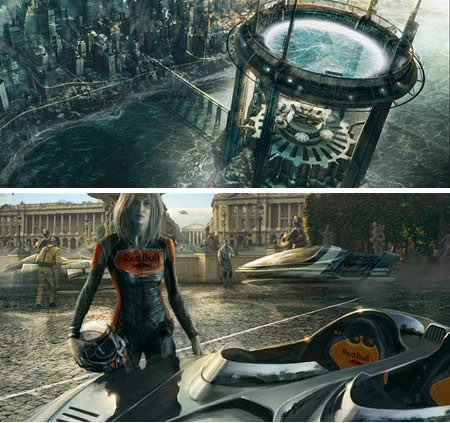 Wheaton has worked as an illustrator, designer and creative director for a variety of companies in print and interactive design, but the real focus of his career has been on his love for movies and gaming, particularly those in which special effects play a significant role.

This has led to his work as a matte painter and concept artist for companies like Intelligent Creatures where he was senior matte painter for films like Babel, Stranger then Fiction and The Number 23; Ubisoft where he worked on the award winning cinematics for Prince of Persia 3; and Rocket Science vfx; as well as freelance work for companies like Pepsi. He has recently landed his “dream job” and gone on contract with Industrial Light and Magic as a Digital Matte Painter.

Wheaton’s web site has been revised and expanded since I last visited and his online gallery has a nice selection of his work from the film and gaming industries as well as some personal projects. The new additions to the gallery include some marvellously dramatic landscapes for Prince of Persia.

Wheaton really knows how to use strong contrasts in value to punch up a scene and give it focus. He has a particular facility for handling large scale scenes and dramatic landscapes. His landscapes, in fact, often show the influence of the great masters of dramatic landscapes like Frederick Church and Thomas Cole. (I can’t give you a direct link because of the way his gallery is set up, but look in the bottom row in the concept art section for his beautiful (and hilarious) Fill’er Up.)

You can also see the influence of the great futurist and concept artist Syd Mead, particularly in images like Race Day (image above, bottom). This is one of my personal favorites. Wheaton has chosen as his background two buildings on the Champs Élysées in Paris which were used by architect Horace Trumbauer (who also supervised the design of the Philadelphia Museum of Art) as models for two nearly identical buildings, The Free Library and Courthouse, on the Ben Franklin Parkway here in Philadelphia.

You can see a breakdown of steps in this painting on Wheaton’s portfolio on the CG Society site. Wheaton also has a gallery on the CG Channel.