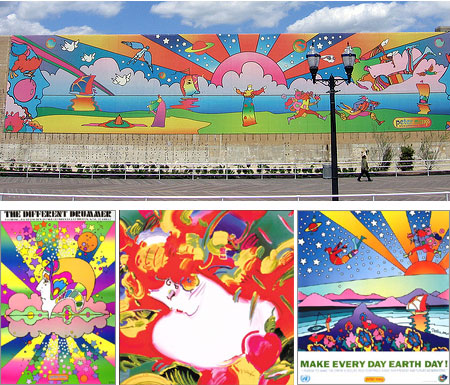 Peter Max rose to fame at a pop artist and poster artist associated with the mass media image of the 1960’s psychedelic art movement.

Max took his influences from the underground psychedelic concert posters and album art of the time, and the graphically simplified echoes of that art pioneered by Heinz Edelmann and Milton Glaser, and refined them into a cheerful, less threatening version that became wildly popular.

Max applied his version of the style to a line of very successful silkscreen posters posters and moved it into advertising design, clothing, and various kinds of marketing and product design, even to busses, large scale murals and the painted fuselage of one of Continental Airline’s Boeing 777’s.

His work became synonymous with 60’s “psychedelic art”, though to my mind he was less of an innovator than people like Stanley Mouse, Victor Moscoso, Rick Griffin, Wes Wilson and Anton Kelly. Fame wins out, however, and Max’s psychedelic lite version became a pop culture icon while the originators faded into obscurity. (I’ll do my best to introduce you to them in future posts.) Heinz Edelmann carried his style into the design for the influential animated feature Yellow Submarine, which is often wrongly attributed to Max.

The path of influences is difficult to sort out, however, and you can see the influence of Max and his progenitors and contemporaries on modern retro-60’s style, European comics artists like Moebius and Bati, and album cover art through the intervening years.

If my tone makes you think I don’t appreciate Peter Max, I’m remiss, because I actually do like him when he’s at his art-deco kaleidoscopic best, I just lament the obscurity of other artists who pioneered this style.

Max himself moved his style into a kind of neo-expressionism, often mixed with the pop psychedelia of his poster art. He expanded his working methods into a number of media and remains active today, creating posters, magazine covers, limited edition prints and gallery paintings.

His work is full of the vibrantly intense color relationships associated with psychedelic and op art, in which high-value, high-saturation colors are frequently juxtaposed with their compliments, causing an increased intensity and optical “vibration” from the way the brain processes color.

His web site has a small selection of his 60’s work. The gallery is the “Shop” (which tells you something), look in the “Vintage Poster” section. There are also interesting works in the contemporary “Posters”, particularly under “Misc.” I can’t give you direct links because the site is in frames.

A collection of his work, The Art of Peter Max, was published in 2002.

There is an exhibition called Peter Max and the Summer of Love at the de Young museum in San Francisco from now till October 28, 2007, supposedly in celebration of the 40th anniversary of the “Summer of Love” in 1967.

I’m not exactly sure what Peter Max actually has to do with the “Summer of Love”, except that they both marked the explosion of the 60’s counterculture into mainstream culture, which was, of course, its death knell. The establishment brownshoes who got so uptight at the rise of the “dirty hippies” who wanted to subvert the authoritarian consumerist conformity they desperately wanted to maintain just didn’t have enough faith in American Popular Culture, which, like a cosmic game of Katamari Damacy, can absorb anything.

[Exhibition listing via Art Knowledge News, photo of Peter Max mural on Atlantic City boardwalk (image top, enlargement here) from Flickr set by iirraa, I’ve taken the liberty of cropping it and adjusting levels. Note the size of the passer-by on the boardwalk.]