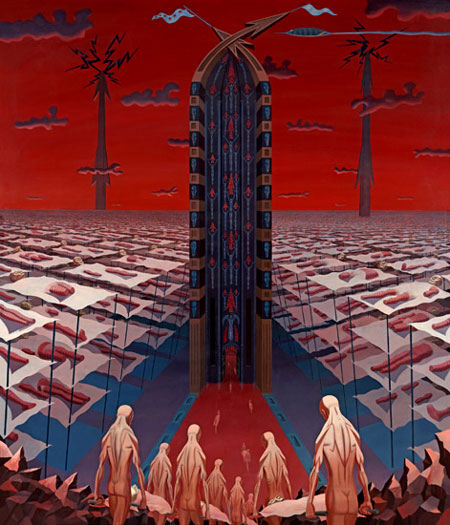 Irving Norman may be the most important “ignored” artist of the 20th Century.

His work is striking, powerful, visually and intellectually rich and complex, masterfully painted and emotionally haunting. He painted dramatic, large scale canvasses exploding with color and detail, in which dozens, even hundreds of figures dance the dances of humanity in the throes of being at their most vulnerable, their most cruel, their most fragile, their most cursed and most noble in suffering. The image above, War Wounded (70 x 60 in, 178x 152 cm), was painted in 1960.

Why haven’t the majority of people, even those conversant in 20th Century art, heard of him?

His art was suppressed because the postwar modernist art establishment suppressed everything but Abstract Expressionism, and its sterile, flat-headed children, for more than half a century.

His art was suppressed because it intentionally makes us uncomfortable, both with jarringly visceral images of pain and violence and with disconcerting reminders of the horrors of war, racism, poverty and inequality; and does so with a raw power, emotional rage and technical facility that makes most “social commentary” art look genteel.

His art was suppressed because his horrifically elegant tableaux of the landscape of suffering humanity, that expose how those with power dominate, manipulate, control and use those without, make those same powerful individuals uncomfortable and angry.

His art was suppressed because he was on the US government’s list of “potential subversives” during the years when F.B.I. Director J. Edgar Hoover and Senator Joseph McCarthy were doing their best to restrict the freedoms and success of anyone who didn’t fit their narrow, ultra-conservative picture of what was acceptably “American”.

Even now, I have to wonder if interest in his work is enough to land you on a “suspected terrorist” no-fly list (and I’m only half joking).

Mark Vallen, on his “Art for a Change” blog, gives a better overview of Norman and his struggle against these forces than I can provide here.

There is a web site devoted to Norman’s work that contains biographical information and images. Unfortunately, the focus of the galleries seems to be on quantity and a historical record of his work through different periods. Few of the images are large enough to convey the power and detail of his large scale paintings. There are a few slightly larger ones on TFAOI along with an essay on the artist and his work.

There is a traveling museum exhibit called Dark Metropolis: Irving Norman’s Social Surrealism, that originated at the Crocker Art Museum and then moved to the Pasadena Museum of California Art. It is now at the Nora Eccles Harrison Museum of Art, Utah State University until October 20, 2007, and will then go to the Katzen Art Center, at American University in Washington, D.C, where I hope to see it, from November 6, 2007 to January 27, 2008.

Don’t let my descriptions of Norman’s powerful art give you the impression that it is about hopelessness, far from it. No matter how horrific his images, those facing the forces of oppression do so with a strength and inherent dignity that cannot be extinguished by the crushing injustices of war and the oppressive forces of modern society.

Much like Norman’s own determined resilience through his personal experience of the horrors and cruelty of the Spanish Civil War and, on returning the US, in the face of 20 years of government surveillance and artistic repression.

[Note: the site linked here contains images of violence and should be considered NSFW.]