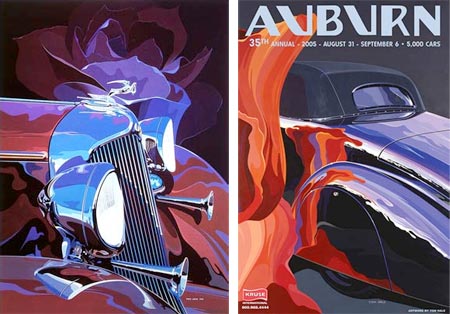 I’ve written before about concept artists and designers who create drawings and paintings of vehicles, and touched on the idea of customized car bodies as modern sculpture (in my post on “Big Daddy” Roth), but Tom Hale, who started his career as an automotive designer, has chosen cars, or more accurately, car forms, as the subject for his paintings.

Unlike many who might say they have chosen cars as the subject for paintings, Hale’s intent isn’t to illustrate the look of a particular model of automobile, though he certainly captures the flavor of individual models in terms of accuracy and detail; rather he sees the forms of vintage cars as objects of beauty.

This particularly applies to older, 30’s and 40’s cars, in which the curve of fenders, the rounded forms of headlight bezels, the dignified rise of grills and the sweeping curves of the bodies are inherently more beautiful and interesting, to my mind, than the designs of the 50’s and beyond. (Cars of the late 30’s, in particular, seem to have a kind of Art Deco grace.) Not that Hale doesn’t also see beauty in later models, particularly the chrome plated cruisers of the 50’s with the bulleted punch of enormous chrome bumpers and the cherry red gleam of the new paints.

Hale makes the forms stand out as forms, isolates them into small selected areas that make it easier to see them as something other than “a car” and renders them in sweeping graphic shapes of brilliant color.

He revels in the reflective surfaces of hand rubbed lacquer and polished chrome and his colors swirl and flow across the forms like the liquid rainbows on a film of oil. His compositions become very graphic, and work very well as posters.

His web site doesn’t mention anything about technique. The work looks like acrylic to me, though his bio mentions an award from the American Watercolor Society.

The gallery on his site kind of bypasses showing the art as art, however, and divides the work into posters and limited edition prints. You will find him portraying entire cars at times, particularly in the posters, but with the same dazzling ribbons of color playing off of reflective surfaces and curvilinear forms.

One Reply to “Tom Hale”