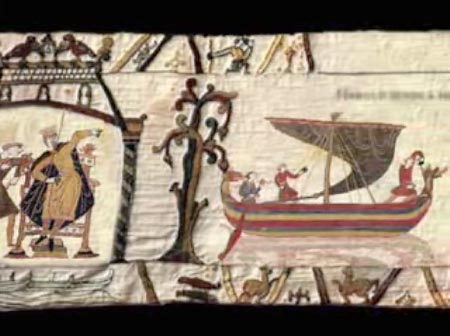 The Bayeux Tapestry is a 20 inch by 230 foot (50cm x 70m) embroidered cloth that shows the story of the Norman invasion of England in 1066, from the “portent” of Halley’s comet to the Battle of Hastings. It may have been completed within a few years of the invasion, but the earliest other record of its existence is in an inventory of the Bayeux Cathederal in 1476.

Like Trajan’s column, some pre-columbian manuscripts and Eqyptian hieroglyphics, it can be thought of as a “graphic story”, a form of storytelling we know today as “comics”; i.e pictures, or words and pictures, arranged in sequence to tell a story (to borrow Scott McCloud’s succinct definition).

In a kind of odd completion of a circle, there is now a computer animated version of the tapestry.

Initiated by a school project when he was 21, in which he merely needed to demonstrate that he had a command of motion graphics software, British designer David Newton took a tracking shot (like a long pan, but along a straight axis) of the tapestry and animated it, added a bit of sound and music and come up with a short movie that probably tells the story better than Hollywood could in a typical over the top blockbuster.

The camera moves along the tapestry and the pictorial elements, kings, princes, soldiers, shipwrights, blacksmiths, ships, horses and a cast of hundreds (well, dozens, anyway) come to life along the story’s path. Delightful.

There is a semi-official site devoted to the actual tapestry, and some info on Wikipedia. The only link I have to the animated version is the YouTube link, which doesn’t have much supporting information.

2 Replies to “The Animated Bayeux Tapestry”