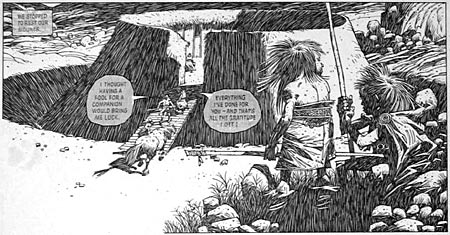 Michael (Mick or Mike) McMahon is a British comics artist who was influential in hammering out the look and feel of Judge Dredd, as well as working on a number of other important characters for 2000AD. McMahon took over on Dredd from Carlos Ezquerra, initially mimicking his style at the editor’s request, but soon putting his own stamp on the character. I was tempted to use the word “refined”, but it’s not a good choice. McMahon’s early work on Dredd was anything but refined, coming at you with a raw, slap-in-the-face immediacy.

McMahon has evolved through numerous stylistic changes in his career, but he is best know for highly stylized drawings in which his characters are created with blocky, angular shapes, peppered with texture.

From the U.S., it’s hard to get anything but scattered glimpses of the UK comics scene, mostly from reprints and album collections, so I don’t know much about how his career progressed or how stylistic influences might have passed between artists like McMahon, Kevin O’Neill, Brian Bolland, Ian Gibson and Dave Gibbons. Viewed from across the Atlantic, it all seems to have arisen from the same boiling caldron.

McMahon did small bits of of work for American comics publishers, notably a Batman: Ledgends of the Dark Knight story, and could be found in titles like The Last American and Tattered Banners.

Judging from his web site, he has apparently been dividing his time lately between comics and art for the gaming industry.

Some of my favorite work of his was for Slaine, a Celtic barbarian hero, in which his style was much more detailed, and, well, if not “refined”, more controlled. In his drawings for Slaine (image above), McMahon filled his areas of black with wild scratchboard textures, giving the feeling of reading a comic story drawn in woodcuts.