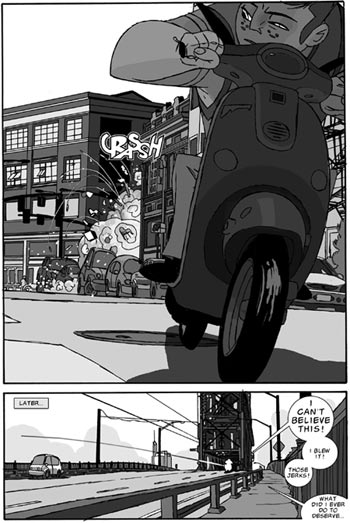 Ovi Nedelcu is a character designer and stroyboard artist for animated film.

He is currently working for Laika, an animation studio owned by Phil Knight, the co-founder and Chairman of Nike, on a new short feature called Coraline, which in turn is based on a novella by Neil Gaiman, who is known for his writing for comics.

Nedelcu is also a comics artist, and outside of his animation work, he writes and draws Pigtale, a comic book series and Lunchbox, a short online strip.

Nedelcu has multiple online presences. His main site has examples of illustration and character design. His blog, OV!, has sketches,experiments, pages from Pigtale and Lunchbox and includes an interview from Mike Manley’s Draw! magazine, in which he was recently profiled.

Lunchbox, a short strip about a couple of young siblings, has its own site; as does Pigtale, though it is a print comic with a few sample page online in the “Story” section. Pigtale, a dectctive adventure, seems particularly interesting for its layouts and panel compositions, which are very cinematic (image above), reflecting Nedelcu’s background in film.

There is also an interviewfrom the Character Design blog that includes many images and serves as a nice overview of his work.

One Reply to “Ovi Nedelcu”