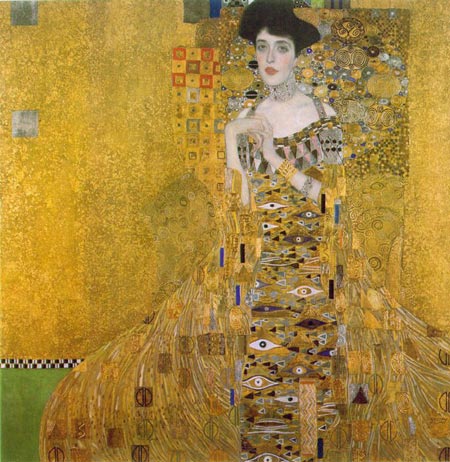 Gustav Klimt is an artist of surprises.

Considered both a symbolist and a member of the Art Nouveau movement, Klimt is most well known for his bold intersections of design and draftsmanship, like his first Portrait of Adele Bloch-Bauer, shown above (larger version here) which last year set a record for the highest price paid at auction for a single work of art, at $135 million.

Unlike many artists whose works become posthumous monuments to the greed-fests in an art market gone mad, in which dealers make millions standing on the graves of artists who lived in poverty and desperation, Klimt actually received a good deal of success with his work during his lifetime. Many of his works from his most successful periods used gold leaf on their surface, a tradition reaching back to the decorative arts of previous centuries.

Klimt’s work is general is some of the most sought after, highly priced and most widely reproduced art in the world, and there are numerous books on the artist. But for those with on only a passing exposure to his paintings and drawings, he can continue to surprise and delight as you delve further.

Klimt’s art can be seen as a nexus of many styles in influences. If you’re familiar with works like the above portrait or his famous image of The Kiss, one of the most widely reproduced images in art, you may be surprised by his earlier works, that are much more traditional and academic (or “realistic”) in approach. Some of them, like Two Girls with Oleander, suggest the work of the Pre-Raphaelites in their blending of Art Nouveau grace with representational painting; others have the muted softness of Whistler’s portraits.

If you are aware of Klimt’s fascination with the female figure and the warm, frank eroticism of his drawings, you might be surprised by the the number and intensity of his landscape paintings.

In his landscapes, as in his most famous figurative works, Klimt flattens out the image to the picture plane, but mixes “realistic” rendering of figures or objects with design elements, often filled with luxurious patterns pulled from the rich history of decorative arts. His figures can retain their “realism” even while being stretched and extended like those of Modigliani or Giocametti, so that the figures themselves become simultaneously decorative elements and pictorial images, both standing out from and blending into the Byzantine dazzle of their surroundings.

He manages to simultaneously prompt delight in our appreciation of design and the decoration of surface, and tap our deep response to recognizable figures and elements of nature.

In other words, Klimt knows how to push our buttons, and oh how we love to have them pushed.

[Note: the sites linked here contain images that are not suitable for children and Not Safe For Work.]