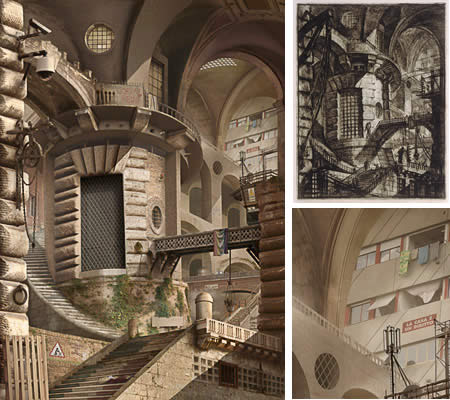 British artist Emily Allchurch uses digital collage, compositing hundreds of her own photographs, usually taken around London, into recreations of old master landscapes. These are then mounted as transparencies in large scale on backlit lightboxes. Her results are dramatic and striking, but the real interest goes beyond that to the “twists”, in which she juxtaposes the classical scenes from the masters with contemporary elements that are anchored in banality.

Her Companion Piece (2004) after Claude Lorraine’s The Mill (see my post on Claude Lorrain) shows a detail of abandoned coolers, blankets, wine bottles and paper plates, the 20th century detritus left behind by her absent equivalent of Claude’s revelers. (To see her piece, go on her site to Gallery: Settings and choose the 4th image. and then the second detail. I can’t give you direct links because her site is contained in a single Flash file.)

In other images in the “Settings” series, the walls of classical Venice under the Bridge of Sighs are made of 19th Century industrial brick instead of 15th century stone, show the marks of 21st Century grafitti and sit above a canal afloat with contemporary trash.

Allchurch’s works, even when not inspired by classical painting, often have more of the feeling of detailed paintings than photo collage. Her work has a surprising feeling of unity, with a control of light, color and atmosphere that belies its origin as disparate elements.

The Gallery on her site lists several series, the most recent of which, “Urban Chiaroscuro”, is a remarkable set of works inspired by the “capricious inventions” of Giovanni Battista Piranesi (see my post on Piranesi). Piranesi put together bits and pieces of Roman ruins, reassembled in his imagination into “Carceri dâ€™Invenzione”, imaginary prisons, fanciful architectural constructions that he portrayed in a series of remarkable etchings (image above, upper right).

Allchurch, in an extremely fitting continuation of the process, has recreated her vision of Piranesi’s work with her artful photo collage reassembly of bits of contemporary London (above left, and detail, lower right). The storm grates, water stanchions, closed circuit TV cameras, grafitti, anti-theft bars and electrical conduits make her recreations of his fantastical prisons just that much more perfect, as if Piranesi’s inventions were real structures that had somehow survived into the 21st Century in some obscure forgotten corner of the city.

To compare her works in this series with their inspiration, see the resources I’ve provided in my article on Piranesi. When looking through Allchurch’s work, be sure to click to see the details.

Of course, the ideal way to see these works would be in person, in large scale as backlit transparencies. Those in London, UK, can see her show at Frost and Reed Contemporary until November 10, 2007.

I found out about this from Michael Hirsh’s always fascinating Articles and Texticles blog, on which he showcases more of these images. He in turn credits an article about the current London exhibit on Art Knowledge News.