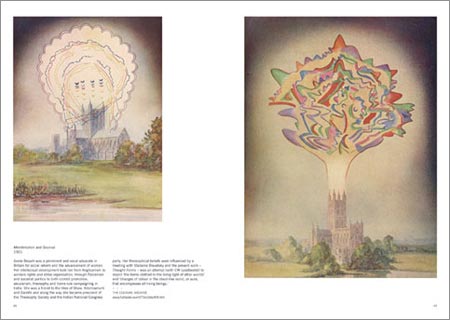 Ephemera is defined as printed or written material that isn’t intended to be preserved. Magazines and newspapers, for example, are meant to be transitory, disposed of once read (the pile of National Geographics in your grandfather’s attic notwithstanding.)

Even many books are meant to be ephemeral; computer instruction manuals, for example, are out of date the instant the ink is dry because the next version of whatever it is has jut gone into beta.

For literally hundreds of years, printed matter has been produced that was quickly made irrelevant by new events. Often this material is accompanied by illustrations, images that are as varied, weird and bizarre as anything intentionally created by fantasy artists.

It used to be that this material was relegated to dusty libraries and second hand book shops, where diligent curiosity seekers would occasionally turn up forgotten gems of oddness and wonder. But everything, it seems, whether ephemeral or significant, is being scanned and put online at some point, as our entire civilization is squeezed through the digital cheesecloth of the internet and filtered into archival bits.

“PK” (or “peacay”) is an individual who has a knack for finding particularly fascinating bits of treasure amid the cultural detritus as it settles into the great Sargasso Sea of internet archives. He collects the most bizarre and interesting pieces of visual ephemera and displays then for our delight on his long running blog, BibliOddysey, which I’ve written about before.

Now, in some kind of poetic circle of weirdness, some of this material has been collected and printed as a book, BibliOdyssey: Amazing Archival Images from the Internet, in which some of the best and strangest of PK’s finds are collected and annotated by PK for our edification, amusement and delighted bewilderment.

The book is part of a nascent publishing venture by the Fuel design group, a well known design firm in the U.K. In his description, PK points out that “With pre-production topping out at somewhere over 500 years, BibliOdyssey might well be the slowest book ever published.”

You can read about the book on the Fuel site, or on the BibliOdyssey site, where you can also, of course, get lost in the online display of ephemera. There’s something special and different, though, about the way images appear in print; and in this case the bits of ephemera are being re-released back into their natural element, at home once again in the sea of printed pages.

Let me see if I’ve got this right now, this is a book about visual material from the web that was archived from books, but I’m telling you about it on the web, and pointing you to online sources from which you could order the book…

One Reply to “BibliOdyssey (the book)”