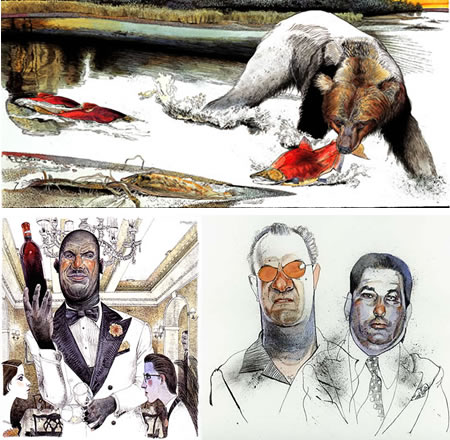 Interestingly, Kansas illustrator Jack Unruh divides his online portfolio into two enigmatically defined sections, What is real and What is not real.

Presumably, the latter has more conceptual and imagination based illustrations, although in both you will find his wonderfully drawn portrait/caricatures of well known figures, images of fish, bears and other wildlife, and scenes of a variety of things and places.

Unruh has a passion for the outdoors, and fishing in particular, judging by the many illustrations of specific species of game fish in his Prints and Stock sections. His illustrations have appeared in Field and Stream, Sports Afield and Sports Illustrated, as well as a roster of major periodicals like Atlantic Monthly, Rolling Stone, Time, National Geographic and New York Magazine.

He also has done illustrations for numerous corporate and advertising clients. His illustrations have had a continuing presence in graphic arts magazines like Communication Arts, American Illustration, Graphis, AIGA and Print, and he also has a well deserved list of awards from the Society of Illustrators and others.

(An interesting side note for readers that have been following my series of articles about displaying your art on the web: all of the galleries on Unruh’s site have what I think is an excellent navigation system for online galleries (one that I’ve used myself), in which a convenient vertical (note: vertical not horizontal) scrolling frame on the right gives immediate access to images that appear in a large area to the left. The scroll bar is thus in the natural position for a scrolling web page, where the user expects it to be. Also the frames in this case are in their own page that can be bookmarked, at least for the major sections.)

Unruh’s approach looks like a combination of pen and ink and watercolor. His pen and ink underdrawing often has stippling and texture not often present in drawings that are intended for the application of color, and he will frequently leave parts of the pen and ink drawing uncolored, leading to a really interesting blend of the two types of image.

Your eye goes back an forth from islands of color to pen and ink textures in a visual smorgasbord that amuses with its variety, but never sidetracks or detracts from the intent of the illustration.

Unruh makes the color and black and white areas flow together in a coherent whole, as if the lines, hatching, spatters, squiggles and dots of pen and ink are just additional “colors” in his palette.

There is an online article about him from the Sep/Oct 2002 issue of Graphis, and an interview on Illustration is Easy.