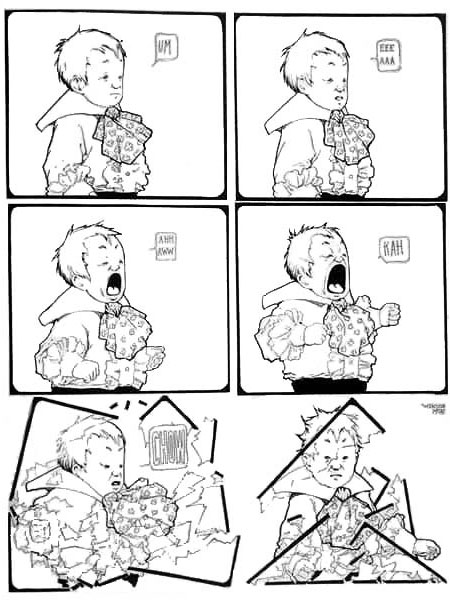 It is sometimes pointed out that Americans have contributed two original art forms to the culture of the world, jazz and comic strips. Though both have precedents, they achieved the state for which they are identified here in the U.S.

One of the earliest pioneers of the latter is still one of its all time masters — Winsor McCay.

Most people who recognize his name (a name which, if there were any justice, should be as familiar as Disney or Picasso) associate him with his pioneering animated film Gertie the Dinosaur and his comic strip masterpiece Little Nemo in Slumberland.

Less well known are strips that ran prior to or concurrently with Little Nemo. The most familiar of these was Dream of the Rarebit Fiend, which presaged Little Nemo in its fancifully imagined dreams (brought on by gastronomic distress from eating Welsh rarebit) that ended with the dreamer waking and falling out of bed. A collection of Dream of the Rarebit Fiend was published this year by Ulrich Merkl in an edition limited to 1,000. (You can see a DotRF strip here from a Library of Congress online feature, Cartoon America.)

This is a good year for Winsor McCay fans, as Sunday Press Books, who previously published the deliriously wonderful collection Little Nemo in Slumberland: So Many Splendid Sundays, in which 100 of those classic strips were printed as they were meant to be seen, at the size of a full newspaper broadsheet; and followed up with Sundays with Walt and Skeezix, reprinting Frank King’s beautiful Gasoline Alley strips in a similar format; is back again with a collection of Little Sammy Sneeze, another of McCay’s less frequently seen comic strips.

Little Sammy Sneeze was based on a simple minded concept, a child who honks off a monumental sneeze at the most inopportune moments and in the midst of some delicately balanced undertaking or social setting, the participants of which are left dumbfounded by the result of the sneeze. Simple minded or not, McCay can’t help but elevate the idea several notches with his inevitably beautiful execution.

This volume collects the complete two year run of the Sunday strip, again printed at original size, in this case a newspaper half-page; as well as the complete run of another rarely seen McCay strip, Hungry Henrietta, a black and white Sunday feature that ran on the back of the color pages in the New York Herald.

See also my previous post on Winsor McCay, in which I go into more detail about Little Nemo in Slumberland: So Many Splendid Sundays; and my post on Frank King’s Sundays with Walt and Skeezix from Sunday Press Books.

You can also find other printings and books on McCay and his work, but the Sunday Press volumes are superb. I haven’t seen the Merkl volume of Dream of the Rarebit Fiend, but it has gotten good notice. The example of Little Sammy Sneeze shown above has been rearranged form it’s horizontal format into a vertical one, and is in black and white, where the new volume is true to the original format and in color.

If you’re uncertain about McCay suiting your taste, try your library. See if you can find some examples (preferably printed large) from the man who was perhaps the Duke Ellington of the comic strip.