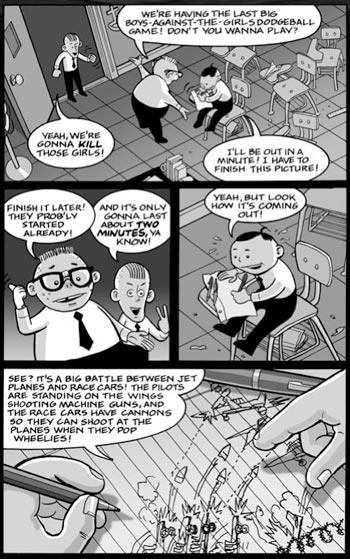 Back in the mid to late 90’s, when the webcomics landscape looked more like an empty plain dotted with tiny houses than today’s bustling metropolis, one of those houses was an online comic called Bugbots: The Mansect Rebellion.

Created by husband and wife team Gerry and Viki Mooney, the strip had a fun, brash, 60’s Marvel feeling to it, with nice touches of humor thrown in. In the fourth issue, the comic became interactive, with panels that changed and revealed their word balloons on rollover. Unfortunately, that comic was eventually abandoned (or is ona long long hiatus), and the Mooneys moved on to other things.

Gerry Mooney, in addition to his continuing work in the areas of cartoon illustration, technical illustration and gallery painting, has ventured back into comics with a new graphic novel project called Sister Mary Dracula.

Based on a Flash animation that he created in 2001, it tells the story of fourth grader named Terry Malloy, a thinly-veiled stand in for Mooney himself as a schoolboy, who is convinced that one of his teachers at St. Egregius the Stricter Elementary, is, in fact, a vampire.

The 100 page story is being published in 20-page chapters, the first of which has been printed and is available through the site. You can read some sample pages on the site, as well as viewing the original animation. (I can’t give you direct links because the site is in frames and the navigation is in Flash.)

It may appear from the wording on the site that “Buy Chapter One” refers to purchasing a chapter of a webcomic, but it actually refers to an issue of the print comic (I think just due to the use of the word “chapter” instead of “issue”). The online pages are simply previews. They are large enough, though, to give a nice feeling for the light touch Mooney has applied to the drawing, with just enough tone work to set an appropriate mood for the story.

I don’t have the background to identify with a strict Catholic school upbringing, but I think most of us, particularly those who liked to draw in school when we were supposed to be doing other things, can find resonance in the protagonist’s experiences and flights of escapist fantasy.

One Reply to “Gerry Mooney”