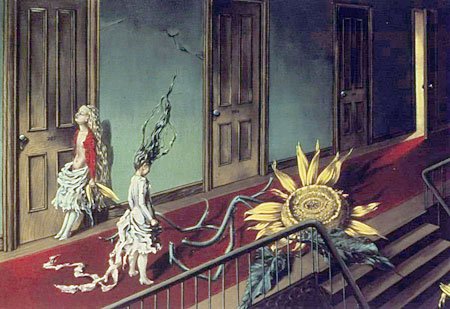 Dorothea Tanning was a librarian from Galesburg, Illinois who is now the oldest surviving member of the circle of Surrealist painters that was centered in Paris in the mid-20th Century.

Tanning moved from Galesburg to Chicago at the age of 20, and studied painting by “looking at paintings in museums”, supplemented with some evening courses at the Academy of Fine Art. She then moved to New York, in the midst of the depression with $25 to her name, and found enough work as a commercial artist to survive.

She began exhibiting in galleries and her work attracted the attention of a group of expatriate Surrealists that included Yves Tanguy and Max Ernst. She and Ernst were later married, in a double wedding with Man Ray and Juliet Browner, and Tanning returned with Ernst to Paris, when she lived and worked for almost 30 years.

Tanning is thought of as a Surrealist and most noted for her haunting, dream-inspired works like Eine Kleine Nachtmusik (image above), the disconcerting nature of which belies the reference to Mozart’s cheery piece. The original is in the Tate Collection in London.

The Philadelphia Museum of Art mounted an exhibition of her work in 2000, when they acquired her well-known painting Birthday, a self portrait in which she appears in a hallway with a seemingly infinite sequence of doors, bare breasted in a feathered gown, with a sort of lemur-griffin at her feet. (Unfortunately, despite the attention given to the acquisition at the time, the painting is almost never on view; perhaps, as Surrealist works sometimes are, a victim of internal politics at the museum.)

Though known as a Surrealist, Tanning’s work past 1950 moved into other realms, in which softly splintered geometries of color mix with hints of representational forms. Tanning is also an established writer and poet, and has continued to work into her advanced age.

You are likely to find more books by her than about her, though there are a few; and she is often included, if briefly, in collections of Surrealist works.

There is a good interview with the artist from 2002 on Salon.

It’s a long way from the Galesburg, Illinois library to hanging out with Duchamp, Magritte, Picasso, Miro and Dylan Thomas. Perhaps Tanning was just headstrong and restless; or maybe she had vision, in addition to visions.