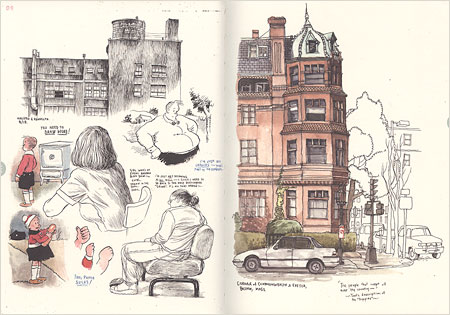 Chris Ware, who I wrote about here and here, has just released The Acme Novelty Date Book, Volume Two: 1995-2000.

For those of you who are only familiar with Ware’s precise, carefully controlled marvels of precision comic art, these two volumes are something else altogether.

Basically they’re sketchbooks, not that different in essence from sketchbooks released by a number of comic artists and illustrators, with a mixture of sketches from life and fanciful doodling, often accented with handwritten notes.

You may notice a similarity in particular to the sketchbooks of Robert Crumb. Though not the marvellously expressive cartoonist that Crumb is, I think Ware is actually a better draftsman, despite his occasional notes of complaint about his own drawing ability.

What sets Ware apart from most, and invites comparison with Crumb, is the exceptional mind and original talent behind the sketches.

The drawings themselves are in turn loose, careful, freewheelingly imaginative, and when drawn from life, wonderfully observant, both of people and of everyday scenes.

Even those not familiar with Ware’s work, particularly if they enjoy sketchbooks, will find much to like in this volume. The sketches for the most part have a personal quality, the kind of honest, often casual, observations of what is a hand when one picks up a sketchbook. A far cry from the careful, self-conscious presentation drawings that many comic artists like to publish as “sketchbooks”.

Artists who frequently fill their own sketchbooks with observations from what’s around them whenever they get the chance will find common ground and inspiration here, quick sketches of people, sketched from angles the indicate the subject was often unaware of being drawn, and numerous room interiors and street scenes, drawn in simple line or detailed crosshatch pen and ink, and often colored with modest but very effective watercolor washes. There are travel sketches from Europe and “around the corner” scenes from Ware’s native Chigago. One is a very detailed watercolor and ink drawing of an airplane cabin, obviously filling as much time as possible on a trans-Atlantic flight.

There are lots of drawings of simple household objects, kitchen counters, tables, chairs and odds and ends like toy robots. There is also plenty of cartoon sketching, including sketches of classic early 20th Century comic characters, like those from Gasoline Alley, as well as sketches and doodles of his own characters, designs for his wonderful fake ads and other germinating ideas. There are lots of handwritten notes about where things were sketched, along with longer passages of various ideas, notions, ramblings, rants and diatribes, giving an unusual glimpse into his thought process.

There are also some comics stories, comics that are printed small enough to have you squinting, nose to the page, but comics nonetheless, and drawn much more freely than you will ever see in his finished comics.

I don’t know what size the original sketchbooks are, but most of the sketches have a feeling of being printed at the size they might have been done, so perhaps the comics were drawn that small.

Interestingly, the paper is off-white and flecked with spots and ink smudges, giving the book feeling of sketchbook pages that have been collected into a classic old library binding, another of Ware’s wonderfully imaginative an detailed book designs.

The image above is not an actual spread, but two separate pages I’ve put together to try to give an idea of the variety in the book.

All in all, this is a treat for fans of Chris Ware, and fans of sketching and sketchbooks in general. This is the second of two volumes, covering the years stated in the title. The first one was composed of sketchbook material from 1986-1995.

There are a few mentions of the first one on the web that include some images from that volume, and a scattering of mentions are begining to appear for Volume Two.

Here are two Acme Novelty Datebook Volume One posts on Book By Its Cover and Read About Comics; and and article from The Comics Reporter on Volume Two.