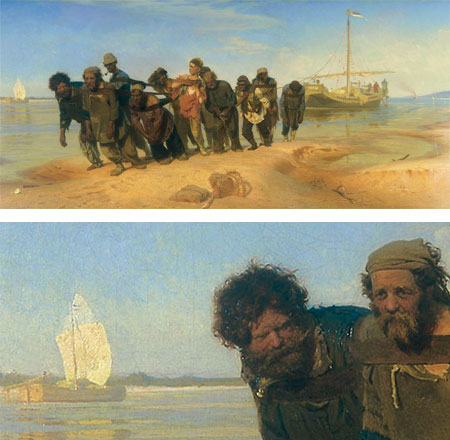 Ilya Repin was probably the foremost proponent of 19th Century realism in Russia. He studied at the Petersburgh Academy of Arts, and was by reports uncommonly talented from a young age.

His image of Barge Haulers on the Volga (image above, with detail below, sometimes called “The Volga Boatmen”) was begun in his last year as a student (large image here).

He lived and worked in Paris for three years, returned to his home town in Russia and then moved to Moscow. He was a member of the group of Russian painters known as the Itinerants (or the Wanderers), who exhibited in traveling group exhibitions, along with Ivan Kramskoi, Ivan Shishkin and a number of other notable painters of the time. There is a short essay on Repin, Shishkin and Kramskoi by Vern Swanson on the Art Renewal Center.

Repin became head of a studio associated with the Petersburg Academy of arts and later served as the Academy’s director.

He painted landscapes, often combined with figures, still lifes, genre scenes and psychologically incisive portraits, including royalty and state occasions, but he is best known for his portrayal of peasants and subjects involving social commentary.

There is a semi-official web site maintained by the artist’s great great grandson, though one of the best online sources for images of Repin’s work is Wikipedia, which hosts a nice gallery of his paintings, many of them with hi-res versions (click to the individual image, then look for “full resolution version”).